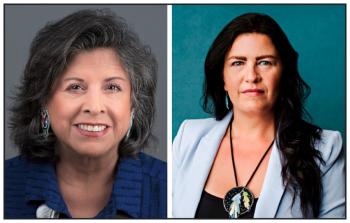 Cynthia Wesley-Esquimaux, chair of the governing circle for the National Centre for Truth and Reconciliation, and Lori Campbell, associate vice president of Indigenous engagement at the University of Regina.

“That's a criminal act, sexual and physical abuse, and (the Church) covers that up instead of turning it in.” — Lori Campbell, associate vice president of Indigenous engagement at the University of Regina
By Shari Narine
Local Journalism Initiative Reporter
Windspeaker.com

On the fourth day of his “penitential pilgrimage” in Canada, Pope Francis acknowledged the “sexual abuse of minors and vulnerable peoples…” by those of the Catholic faith.

The words were spoken not in a public mass, but to bishops, priests, deacons, and other church-related people in the vespers the Pope celebrated in the Cathedral of Notre Dame in Quebec on July 28.

“The Church in Canada has set out on a new path, after being hurt and devastated by the evil perpetrated by some of its sons and daughters. I think in particular of the sexual abuse of minors and vulnerable people, scandals that require firm action and an irreversible commitment.  Together with you, I would like once more to ask forgiveness of all the victims,” said the Pontiff in Spanish.

Cynthia Wesley-Esquimaux, chair of the governing circle for the National Centre for Truth and Reconciliation and chair on the Truth and Reconciliation Committee for Lakehead University, says acknowledging sexual abuse, adding it to the Pope’s message being delivered during his stops in Canada, is an indication that he is listening after having been “called out.”

His official apology, delivered in Maskwacis in Alberta on Monday, made no mention of sexual abuse. He did ask forgiveness for “projects of cultural destruction and forced assimilation… which culminated in the system of residential schools.”

“The minute the Pope said something about sexual abuse (on Thursday), that was a big gate being opened for Indigenous peoples. I went through that my own self because my parents went to residential school. I experienced sexual abuse when I was a child. I understand how awful that is and what it does to your life,” said Wesley-Esquimaux.

She said sexual abuse continues to happen today in Indigenous communities and “it's not a priest in our bedrooms” although it is part of the legacy of residential schools.

As for Francis not making the specific connection between sexual abuse and Indian residential schools in his speech, Wesley-Esquimaux doesn’t think that was necessary.

She points out that it is well-understood that the only reason the Pope has come to Canada now is to address residential school survivors.

She says the eyes of Canadians and the international community were drawn to the uncovering of unmarked graves at residential school sites last year, which made the Pope’s visit necessary.

“I think he has a lot to apologize for. His priests have been doing stuff across the world for a very long time and I think we often say, ‘All my relations’ and we often talk about our connectedness and our inclusivity, and the Pope apologizing for all sexual abuse victims is inclusive of, and he’s saying, ‘I get it. There's been a lot of damage done to a lot of children, not only Indigenous children’,” said Wesley-Esquimaux.

But Lori Campbell, associate vice president of Indigenous engagement at the University of Regina, does not support the Pope’s generalization of abuse.

“It's taking away from the very specific agenda of what occurred in residential schools and the role the Catholic Church played in it by not naming this specifically to the residential schools, to Indigenous children and against…the physical and sexual abuse (by) the organization that allowed that to flourish, because it was known,” said Campbell.

However, Wesley-Esquimaux says that many survivors hold the abuser accountable and not the church.

“The survivors I’ve had close contact with over many years now, including my mother, who is not Catholic but her husband was, is that they don't actually blame the church as much as they blame the individuals who are abusive,” she said.

Pope Francis has yet to apologize for the Catholic Church as an institution and has instead talked about out how “many members of the Church and of religious communities” behaved.

If the Pope wants to continue on that path, says Campbell, he and the church should be pushing to bring individual priests to justice instead of “support(ing) criminals. That's a criminal act, sexual and physical abuse, and (the Church) covers that up instead of turning it in.”

Campbell points to the call Ottawa has made to France to extradite Johannes Rivoire, a priest who is accused of crimes against children in Nunavut.

“The church as an organization can bring him forward to go through the due process, whatever the outcome,” she said.

This morning, Pope Francis delivered a last-minute public address before he met with 22 survivors from Eastern Canada. Once more he offered “my heartfelt pain, heartfelt pain of the church at the wrong inflicted on you by not just a few Catholics who supported oppressive and unjust policies…”

This afternoon he left for Iqaluit, where he will have both public and private events before he makes his return trip to Rome.