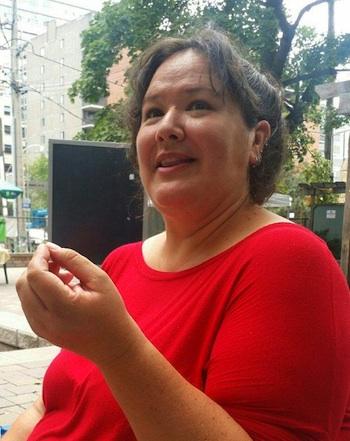 Imagine going from being just one-eighth Indian to being half Indian. That requires a whole identity shift, a reinvention of self.

This is just one of the themes that playwright Shandra Spears Bombay explores in her half-hour one-woman show “If This is the End.”

It’s a work in progress that she workshopped for four days with her ‘dream team’ at Summerworks Festival in Toronto. It culminated in a half-hour public performance on Aug. 12 in the Factory Theatre Mainspace at 125 Bathurst Street.

A 60’s Scoop survivor, Spears Bombay was adopted in 1969 when she was five-and-a-half months old. Her adoptive family was the fourth set of parents she’d had, counting her birth family and two sets of foster parents.

She was told she was adopted, and that’s when she learned she was supposedly one-eighth Indigenous.

“At that time in my very white context,” she said, “that was nothing. It wasn’t really relevant. I was white.”

At the age of 19, she met her birth mother, a non-Indigenous woman she calls Linda. Spears Bombay learned from Linda that her father was 100 per cent Native, making her half Native, which then called for a journey to find her culture.

“By the time I did this, I was already a hard, tough woman. People don’t know you have to be tough to get through that transracial adoption experience. It was frustrating because people were like, ‘oh, you’re a lost bird and we’ll help you find your way back’. It wasn’t what I was used to. And to act like I didn’t know anything, that was hard. I already had all this leadership ability and it sucked to be starting from scratch at age 20. But it was beautiful too, because our culture is so healing.”

Summerworks Festival is recognized as one of the most important platforms for launching new Canadian works.

“It’s amazing how much you can do in 20 hours,” Spears Bombay said following the performance, “especially when you have a great team.”

Working with her dream team were Marion DeVries and Heather Majaury, who directed and dramaturged the play. They also organized the lighting, which was “awesome,” Spears Bombay said.

“I had a huge stack of writing, but it wasn’t organized. I had this plan where I was going to pull a really good draft together but that didn’t happen. I spent the first day with Marion just telling stories, and from there we started pulling out pieces. She was great because she’d stop and ask me questions and that made me realize the audience needs to hear the story a step at a time. I was in a hurry to get to where I wanted to go.

“Then Heather came in the next day and we mapped out the second half.”

“If This is the End” is autobiographical and Spears Bombay bares it all on stage with a great deal of courage, humour, skill and vivacity. The stage is bare except for a few sheets of paper on the floor.

She’s comfortable in that space, although we sometimes get a glimpse of a shyness, accompanied by a disarming grin when she opens up on a subject that might cause discomfort, not just for her audience but for herself.

However, she seems grounded in the belief that this is her time, this is her life and she gets to decide what to tell us and how to tell us. She wants it to be as honest as it can be, but, “There were definitely areas where I had to be gentle with myself, where I had to think about my own safety,” she said.

At times, she seems to surprise herself with a revelation, and a cheeky smile appears that seems to say, ‘I wonder what my family would think of that.’

On stage, Spears Bombay has an ease with her transitions, from light moments to dark moments and back to light again. It is in talking about her father, Randy, where she is the most vulnerable. Randy died before she had a chance to meet him, she tells the audience. Talking about his death in a Toronto hospital waiting room unleashes anger and pain.

“My job was to keep Randy central to this round of my story,” she said following the performance. “I have many years of veering away from that pain, so that was my challenge to myself, to make sure I didn’t veer away from Randy.”

She learned from her birth mother that Randy was a writer and that he had a publisher.

“At the last minute he’d rip up his work and burn it. I don’t know how many times that happened. So, whenever I do anything with my writing and get it out in front of people, I’m bringing two generations along with me.”

The Weesageechak Festival, held annually by Native Earth Performing Arts in Toronto, is the next stop for Spears Bombay. She’ll workshop the play in November. Her ultimate goal is to have it ready for the Impact Theatre Festival in Kitchener in 2017, and after that, she wants to take it on the road.

In the meantime, she’s also working on a book of her life. And she’s resurrected the name Spawn.

“I miss that part of myself,” she said.