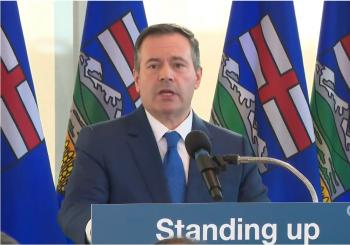 “We (have) observed the virtual anarchy that has broken out, shutting down key elements of Canada’s infrastructure. We will not tolerate that here.” — Alberta Premier Jason Kenney
By Shari Narine
Windspeaker.com Contributor

This is not reconciliation with Indigenous peoples, said Alberta Premier Jason Kenney, when economic uncertainty caused by left wing zealots and anarchy allowed by the federal government led Teck Resources Limited to withdraw its application for the $20-billion Frontier oilsands mine planned for northern Alberta.

Kenney addressed staff, stakeholders and his cabinet on Feb. 24, the day after Teck president and CEO Don Lindsay issued a letter to federal Environment and Climate Change Minister Jonathan Wilkinson announcing his company’s decision to pull back from the mine.

Lindsay blamed the lack of a “framework … that reconciles resource development and climate change, in order to produce the cleanest possible products” in the face of a rapidly changing global market.

In his two-page letter, he stated, “(The framework) does not yet exist here today and unfortunately the growing debate around this issue has placed Frontier and our company squarely at the nexus of much broader issues that need to be resolved. In that context there is no constructive path forward for the project.”

The federal Cabinet was to make a decision this week on the project, which has been going through the regulatory process for years and at a cost of over $1 billion to Teck. However, in a joint statement issued by Wilkinson and Natural Resources Minister Seamus O’Regan, they stated Cabinet will no longer be making a decision.

Just the day before Teck withdrew its regulatory application for the Frontier project, the Alberta government announced it had secured updated agreements with the Mikisew Cree First Nation and Athabasca Chipewyan First Nation in supporting the Teck Frontier mine project.

That agreement addressed issues in sustaining bison and caribou habitats, protections for Wood Buffalo National Park, and setting out a path for cooperative management of the Kitaskino Nuwenëné Wildland and the Ronald Lake Bison Herd.

Teck has been held up for its consultation model by both the federal and provincial government as well as the impacted Indigenous communities.

In a statement, Mikisew Cree Nation Chief Archie Waquan applauded Teck, along with the province and the federal government, for partaking in a 10-year “rigorous review” of environmental and cultural studies which led to the First Nation giving its support to the Frontier Mine project.

Kenney said Albertans were “deeply distressed” by Teck’s decision to withdraw its application. He further stated that the loss of jobs – 7,000 during construction and 2,500 for operations – would greatly impact Indigenous peoples as the project would have had a lasting impact on economic development for the 14 First Nations and Metis communities in the region.

On Wednesday, the Indian Resource Council had been set to host an event in Calgary with Canada Action, a volunteer organization that supports Canadian energy development and the environmental, social and economic benefits that come with it, in support of the Frontier project.

“Reconciliation with Indigenous people is a moral obligation of our time,” said Kenney.

‘Reconciliation does not mean locking Indigenous people into permanent poverty. Reconciliation has no meaning if it says to Indigenous communities and remote and northern parts of Canada where they do not have service industries or manufacturing industries or tech industries, what they have in those lands, the lands their ancestors first inhabited, what they have is natural resources, the kinds of natural resource that we Canadians have developed all through our history. But let’s be honest too often through our history those Indigenous people were excluded from the opportunity to benefit from resource development. That is changing now. That is changing here in Alberta.”

He blamed Prime Minister Justin Trudeau for not controlling “the anarchy” that had spread across the country over the past two weeks in solidarity with Wet’suwet’en hereditary chiefs who want worked stopped on a pipeline, and forcing Teck Resources to pull out.

“So I say to the Prime Minister …but I really say to the urban green left zealots who have been trying to appropriate the cause of First Nations, what in fact you are doing is slamming the door shut on their economic and social future. The government and the people of Alberta are determined to overcome that zealotry from the far left to be partners in prosperity with our Indigenous people fully in the future. Just as we were in this project, we will continue to lead the way with the model of reconciliation through prosperity and we plead with the federal government to join us in that,” said Kenney.

Kenney announced that the first bill his government would introduce when the Alberta Legislature begins its next sitting on Feb. 25 will be the Critical Infrastructure Defence Act, which will create stiff penalties for anyone who riots on or seeks to impair economic critical infrastructure, including railways, in Alberta.

Demonstrations have been held across the country, including blockades of railway lines that have impeded the country’s trade.

“We (have) observed the virtual anarchy that has broken out, shutting down key elements of Canada’s infrastructure. We will not tolerate that here,” said Kenney.

Kenney said that in private discussions he had with Lindsay, the Teck CEO stressed concern for the safety of his employees and the public. Kenney also said that the federal government informed Lindsay that it would not be making a decision on the Frontier project this week, but that a decision would be deferred to a later date. Neither of these points were raised in Lindsay’s letter to Minister Wilkinson.

Kenney, who applauded a 4-1 decision that came down earlier today from the Alberta Court of Appeal that ruled the federal carbon tax as unconstitutional, said Alberta’s and Ottawa’s inability to agree on how to fight climate change and Alberta’s emissions policy were never raised as an issue by Teck in private conversations.

Kenney would not commit to further action on the Frontier project, including whether or not Alberta would purchase the Frontier mine lease.

“We’re ruling nothing out,” he said.