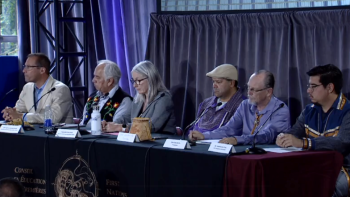 “We haven’t closed the door on potential options to intervene on (Bill) 96. But we understand it’s a very important file, very demanding in terms of how leadership will position itself…” —Ghislan Picard, regional chief for Assembly of First Nations Quebec-Labrador
By Shari Narine
Local Journalism Initiative Reporter
Windspeaker.com

A historic $1.1 billion education funding agreement signed today between the federal government and 22 First Nation communities in Quebec was overshadowed by continuing concerns stemming from Premier François Legault’s Bill C-96, language legislation that is meant to protect French in the province.

“Despite all the benefits that we’re getting from this agreement, there are still a lot of issues to be worked out. And when we’re looking at the province of Quebec, one of the major issues… (is that) Bill C-96 raises the wall even higher,” said Gesgapegiag Chief John Martin. “We’re very concerned about that. I think we’re going to use all those resources to try and help us figure out a way forward.”

The new education agreement was signed on the Kahnawà:ke Mohawk Territory, which hosted a number of demonstrations this past spring against the Bill C-96, which will see the French language pushed in such a way that it will disadvantage non-French-speaking First Nations, chiefs assert.

Concerns over the bill include the isolating impact that doing business in French-only will have on Indigenous communities that operate in English and their Indigenous languages. Health services, legal services and social services off-reserve will be offered in French, and contracts to be signed for economic development on reserve will have to be in French. It will also be difficult for students to meet French language class requirements to qualify for community college.

Indigenous Services Canada Minister Patty Hajdu said the education agreement was a means to fight against Bill 96, An Act respecting French, the official and common language of Quebec.

The agreement ensures that the education needs of students, from kindergarten to Grade 12, are fully funded and based on community models, priorities, and realities. The agreement allows for a culturally appropriate curriculum; improved funding for school transportation; recruitment and retention of teachers and specialized resources; improved student access; and increased student retention and high school graduation rates.

“Today’s agreement, I think, strengthens (First Nations’) capacity to do that important work from a financial perspective but also from a self-governance perspective,” said Hajdu.

She said she had shared her concerns about the impact of Bill C-96 “directly with the minister responsible here in Quebec as well as (Attorney General and Justice) Minister (David) Lametti.”

Martin, who is also the chief responsible for education, did not dismiss the importance of the agreement or the support provided by Hajdu, who committed to continuing “to stand and advocate for the chiefs,” but he said it wasn’t enough.

“We need to have the federal government to stand up and support us and actually raise the question themselves in terms of looking at the question about exercising First Nations constitutional rights to protect our languages.”

Picard said “it’s almost written in the sky” what will happen after the provincial election, slated for Oct. 3, and there were “more challenges ahead.”

“We haven’t closed the door on potential options to intervene on (Bill) 96. But we understand it’s a very important file, very demanding in terms of how leadership will position itself, but it’s still on the backburner. It’s still very much in the minds of many chiefs,” said Picard.

The five-year education funding agreement signed today has been in the works for 10 years. It provides approximately $1.1 billion for the 22 communities to implement education programs to support the academic success of their students. Budget 2022 announced $310.6 million in new funding from Indigenous Services Canada, which will complement approximately $790 million through existing education funding streams.

Hajdu committed to the funding being long-term and sustainable.

The communities that were not included in this agreement, said Picard, have their relationships defined with both Quebec and Canada in different ways.

He said the communities that had treaty, which “provides specific relationships” with both Quebec and Canada, had to be negotiated under treaty.

“And then you have eight communities within the Innu Nation and they have also the relationship with both Quebec and Canada on many, many, many files including education,” he said.

“This is certainly a reality that also concerns other communities, how we can ensure the catch-up on many fronts including education…That process is possible for the other communities and the support will definitely be there as well.”

Hajdu said funds were available for those communities not represented by FNEC and she would continue to work with them to meet her government's commitment of closing the gap in education, as well as other areas such as health and infrastructure, by 2030.