10,000 kilograms of toxic mercury waste: What would 170 MPPs do if people in their hometowns were poisoned? 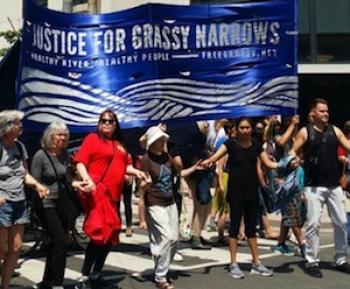 In Toronto June 2 for the march for justice for Grassy Narrows First Nation.

“But something else happened in 1962,” said Moola, who is with the David Suzuki Foundation and is a professor at both York University and the University of Toronto.

“In 1962, the Ontario Government gave permission to a pulp and paper company in Dryden, Ont. to dump 10,000 kilograms of toxic mercury waste into the Wabigoon River. The people of Grassy Narrows have been dealing with the results of that ever since…

“Shortly after mercury was dumped into the river, it began to appear at very alarming concentrations in the fish and in the water and in the people of Grassy Narrows themselves.”

A busload of Grassy Narrows citizens, primarily youth, travelled 1,700 km over two days by bus to join in a rally and march known as the River Run.

More than 1,000 people attended the rally to show their support for this community that has been seeking justice for over 50 years. For countless generations, Moola said, the Wabigoon River was sacred to the people of Grassy Narrows. It provided fish, drinking water and employment for members of the community in the fishing industry and the guiding industry. Moola said the people of Grassy Narrows have become leaders in the environmental justice movement.

“On behalf of the David Suzuki Foundation and our tens of thousands of supporters right across the country, we are calling on the Premier and the Government of Ontario to listen to the science and to finally bring justice to the people of Grassy Narrows.”

Chief Simon Fobister of Grassy Narrows First Nation said the government of Ontario has taken the stand that “nature will take its course and that the river will cleanse itself. They’ve been saying that for years and years,” said Fobister, “and there’s been no action.”

On May 30, Grassy Narrows released a report authored by three renowned scientists that says the mercury can be cleaned from the river system. The cost of the research leading up to the report was funded by the Ontario government.

Dawn Bellerose, newly-elected Aboriginal representative on the executive board of CUPE, said she was honored to stand in solidarity with the people of Grassy Narrows.

But it’s a tragedy too, she said, “because after 50 years, it’s not yet cleaned up for them to have their land and water back.”

“There are 170 MPPs in this building behind us,” said Bellerose. “Do you think they’d ignore it if people in their hometowns were being poisoned with mercury? A report that was commissioned by Premier Wynne herself said that it can be cleaned up and still, she denies it. She stands in that building, apologizes for past atrocities while turning a blind eye to atrocities that are happening on her own watch.

“I came here today to say that 250,000 CUPE members in Ontario stand in solidarity with the people from Grassy Narrows,” said Bellerose. At CUPE’s recent annual meeting, she said the membership committed to join the fight to get the government to clean the mercury in the water and to stop all industrial logging in Grassy Narrows.

Francis Kavanaugh, grand chief of Ontario’s Grand Council Treaty #3 said he has seen the devastating effects of mercury poisoning on the community and the people.

“There was a recent study done,” Kavanaugh said, “the river has been found to be still very highly toxic even though there are examples around the world where situations like that have been remedied, where once lakes and waterways were so contaminated there was no life or living organism in those areas. But because of scientists and their strategies to rehabilitate those waterways, it’s been proven successful. I don’t see why Premier Wynne has not supported the idea there’s a way to bring about resolution to the issues that Grassy Narrows faces on a daily basis.”

Kavanaugh pledged to do all he could to make the government accountable.

The march from Queen’s Park led by the youth of Grassy Narrows made its way along University Avenue to College Street ending at Allan Gardens at Carlton and Jarvis. There were stops for round dances at major intersections. When asked what he thought of the turnout, Chief Fobister pronounced it, “Awesome support!” 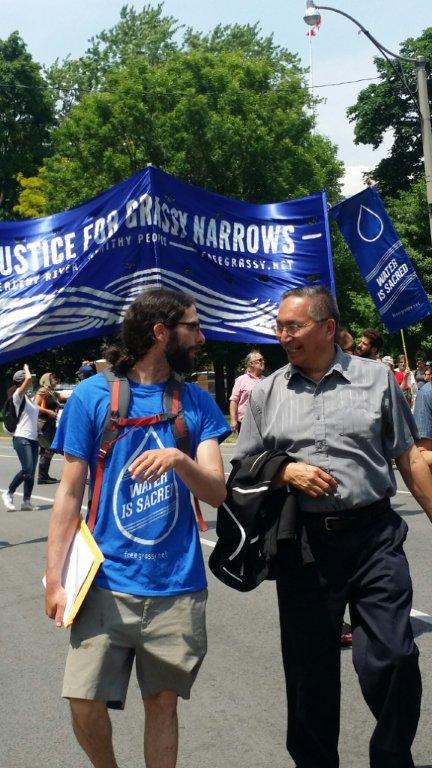 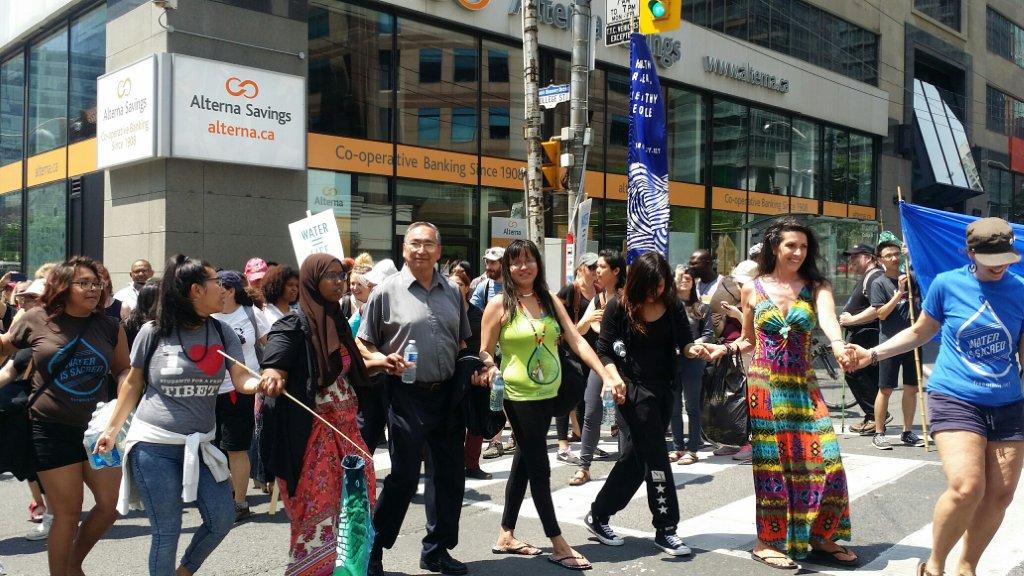 Round dance at College and Bay streets 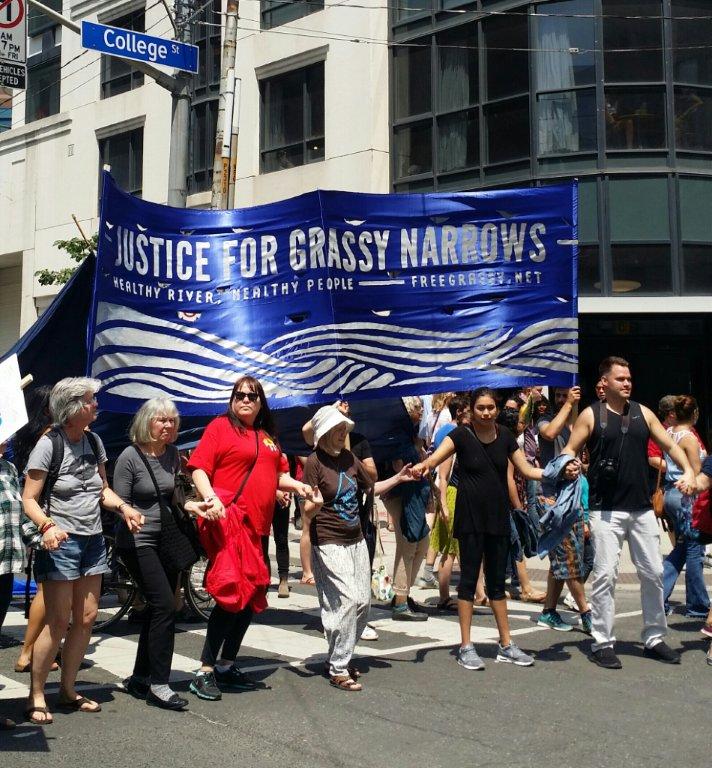 In Toronto June 2 for the march for justice for Grassy Narrows First Nation. 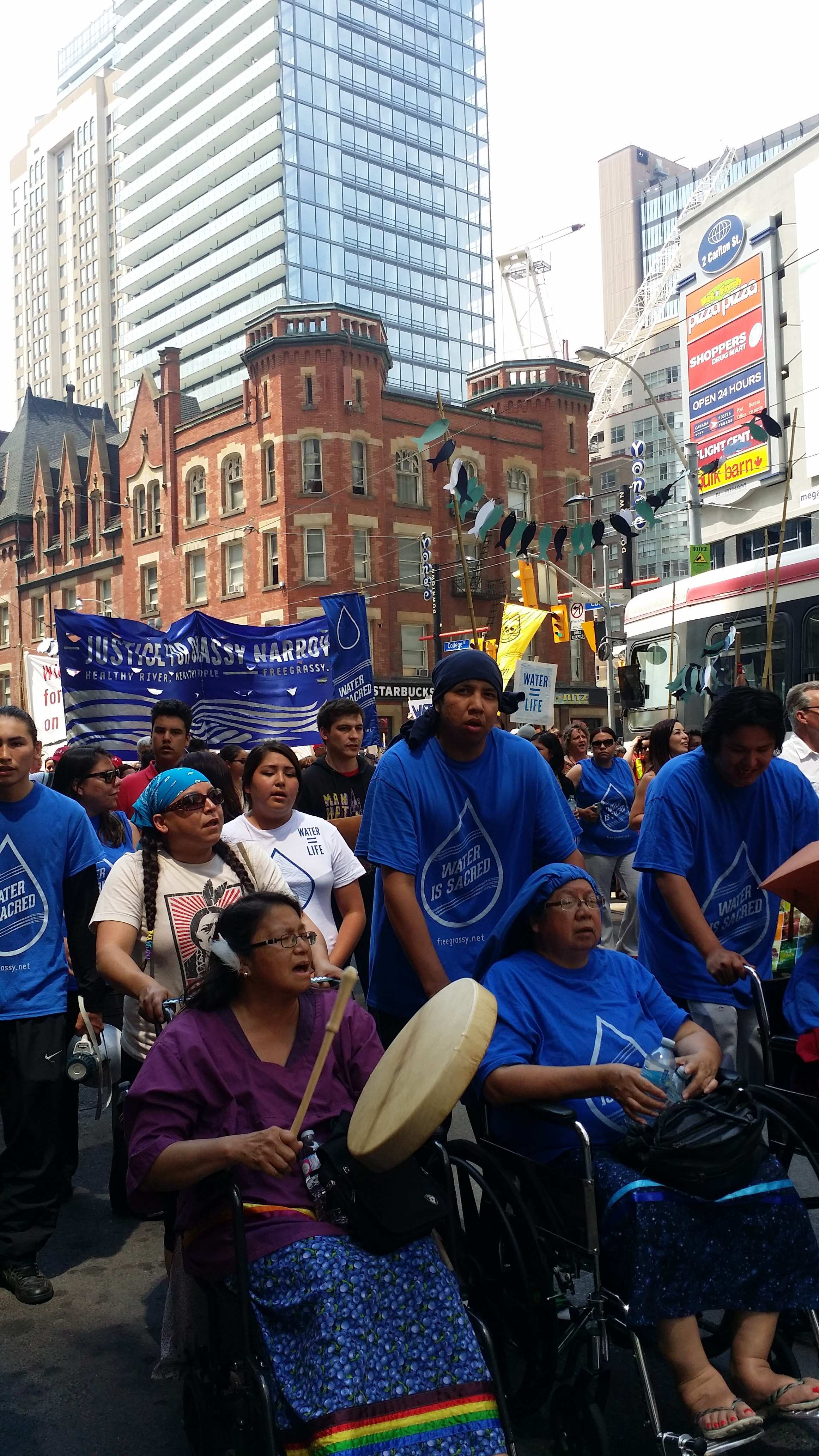