Young provincial champ continues to rack up the wins 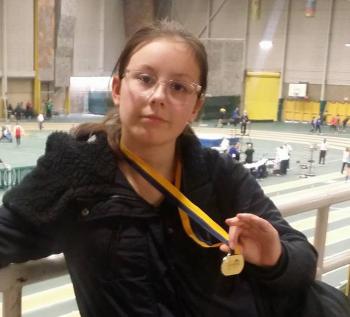 Hollingworth, a member of the Enoch Cree Nation, located on the border of Edmonton’s west side, won her latest title this past Feb. 19 taking top honors in the girls’ Bantam shot put competition at the Alberta Indoor Games.

Hollingworth beat out 46 other entrants in her event, which was held at the Universiade Pavilion, more commonly known as the Butterdome, located on the University of Alberta campus in Edmonton.

Her winning toss of 8.82 metres was 1.14 metres better than the runner-up, Jolie Thunderchild, a member of Lloydminster’s Split City Sonics.

The Bantam category is for those competitors ages 11 and 12. Hollingworth’s father Chris said his daughter’s  accomplishment is even more impressive considering she was competing primarily against entrants a year older.

“She’s only a first-year Bantam,” he said. “It’s hard to win. One year at that age makes a massive difference.”

Hollingworth, a member of the Edmonton-based Capital City Track Club, is no stranger to competing against older athletes.

Two weeks prior to the provincials she moved up an age grouping and entered a Midget (13- and 14-year-olds) category at the Panda Open, a meet held at the University of Alberta. She beat out eight other participants to win that competition.

“That’s more impressive,” said the elder Hollingworth. “But she certainly wouldn’t win the provincials at the Midget level (now).”

Hollingworth said it can be a bit intimidating competing against older athletes.

“They’re a little frightening and a little scary,” she said. “But they clap for you and they’re all nice.”

Despite being one of the youngest entrants in the Bantam category, Hollingworth said she was expecting to win another provincial title.

After all she had captured top honours in her age grouping at the previous five Alberta indoor championships.

Her string of victories began a half dozen years ago at the age of six when she won her Tyke (8 and under) division. She defended her crown the next two seasons.

Hollingworth then captured back-to-back provincial titles at the Peewee (9-10) level before moving up to the Bantam division this year.

The elder Hollingworth believes his daughter can become even more dominant in her current age grouping.

“She might throw another metre and a half in her second year of Bantam,” he said.

Hollingworth will no doubt continue to improve. That’s because starting in May besides training with her own club she has also been invited to work out with athletes from the University of Alberta track and field club.

Hollingworth considers it an honour she was chosen to train with the university club.

Hollingworth took up the shot put at the age of six since her father also participated in the activity.

“He still throws the shot put and is the best in his age group,” she said of her 52-year-old father who competes in Masters events.

Chris Hollingworth is from Montreal. His wife Corina (Christina’s mother) is from the Enoch Cree Nation.

As for Christina, a straight A Grade 6 student at Edmonton’s Centennial School, she is keen to continue her shot put career.

And yes, her long-term goal includes participating at the sport’s highest level.

As for her more immediate future, Hollingworth’s next meet is scheduled for March 3 and March 4 in Edmonton.

Since shot put is not offered at her elementary school, Hollingworth is not on the Centennial track and field club.

But she does represent the school in cross-country running races during the fall season.

Besides shot put, Hollingworth has also participated in another track and field event, the discus throw. That sport though only has outdoor competitions.