Young hockey players make the most of their talents in the U.S. 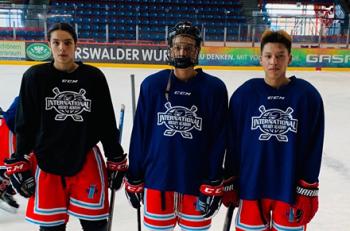 Remington and Rhodes Buffalo, members of the Samson Cree Nation, and Utin Lightning and Nasland Ermineskin of Ermineskin Cree Nation will be attending school and playing hockey in Florida for the season.
By Sam Laskaris
Windspeaker.com Contributor

Four Indigenous youth hockey players from Alberta are taking their talents to the sunny south this season.

This includes 17-year-old twin brothers Remington and Rhodes Buffalo, members of the Samson Cree Nation, who will make up half of the Alberta contingent on the International Hockey Academy (IHA) boys’ Prep squad.

Joining the Buffalo brothers on the IHA team will be Utin Lightning and Nasland Ermineskin, both members of the Ermineskin Cree Nation.

Those on the IHA club attend school at the academy, which is located in Clearwater, Florida. The head coach and general manager of the program is former National Hockey League defenceman Adam Bennett.

Besides competing in several showcase tournaments throughout North America during the season, the IHA side also participates in the under-18 division of the North American Prospects Hockey League.

The Buffalo brothers, who are both forwards, and Lightning, a defenceman, are currently in Berlin, Germany as part of an 11-day season-opening trip. While in Europe, the IHA team will also play a match in the Czech Republic.

The squad is scheduled to return to Florida this coming Tuesday.

Ermineskin only recently committed to the squad and did not make the overseas trip. But he will arrive in Florida in time for the start of the school year on Aug. 29.

Attending the IHA is expensive. Cory Buffalo, the twins’ father, said it is costing $37,500 (U.S.) for each of his sons to play at the Florida academy.

This fee covers their schooling, billet expenses, meals, as well as all hotels and airfares for all team trips.

The elder Buffalo said he didn’t hesitate about the price tag to send both of his sons to the American academy.

“I didn’t give it a second thought.”

Cory Buffalo is hoping both of his sons, who are heading into their final year of high school studies, go on to play at the Junior A level for a couple of seasons, preferably in the U.S. And he’s also hoping they both continue their careers after that by earning athletic scholarships to attend an American university.

The elder Buffalo does not believe such opportunities would have existed for the twins had they remained in their community.

“A lot of boys are overlooked for Midget AAA teams,” he said. “I know my boys were good hockey players but they weren’t given a chance to play (locally).”

To this end the Buffalo brothers moved away from home this past season to attend the Pursuit of Excellence Hockey Academy in Kelowna, B.C.

They felt their careers could then be furthered by transferring to the IHA for the 2019-20 season.

The twins’ mother, Laureen Omeasso, also believes the switch to the American academy will be beneficial for their hockey development. But she admits to some concerns having the boys in another country.

“I’m afraid a little bit,” she said. “And (neighbouring) Tampa is a big city.”

Cory Buffalo said his sons have already generated plenty of interest since they moved away from home a year ago. The twins toiled for the Pursuit of Excellence’s Midget Varsity team during the 2018-19 campaign.

Those efforts generated interest from the IHA. The brothers committed to the Florida academy in the spring.

Cory Buffalo said his sons were then contacted by about 15 Junior A franchises, from the British Columbia Hockey League and the Manitoba Junior Hockey League, who were hoping to have the twins attend their spring tryout camps.

Cory said his sons did not attend those camps since they had already decided to join the IHA for the coming season.

“What we really hope to get is the hockey development,” she said. “This fits that goal. And he’s also going to get the exposure and the experience. It’s a bit different. Maybe he’ll grow up a little bit as well.”

Besides Florida, the IHA club will compete in showcase tournaments in Pennsylvania, Illinois, Minnesota, Connecticut, Ohio and Michigan.

It will also take part in a pair of Canadian events in Calgary and in Toronto.

Lightning, 16, is entering Grade 11 so he could conceivably play two seasons at IHA.

“For now, we’re committed to the one year,” Angela Lightning said.