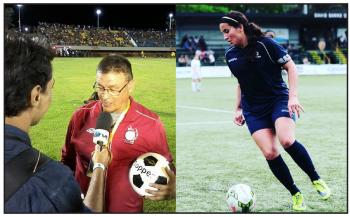 “There’s still barriers and systems that exist that don’t recognize our program as they do for the mainstream organizations.” — Coach Dano Thorne, founder of the Native Indian Football Association
By Sam Laskaris
Local Journalism Initiative Reporter
Windspeaker.com

But the 31-year-old member of Cowessess First Nation in Saskatchewan would love to add to that by leading a Canadian team to glory at next year’s World Indigenous Games (WIG) in Brazil.

The Canadian squad will be represented by members of the Native Indian Football Association (NIFA), which was founded in 1991.

There have been two WIG so far. The inaugural Games were held in Brazil in 2015 and then Edmonton hosted the 2017 WIG.

The NIFA entries won the gold medal in women’s soccer in both of those competitions.

Team officials were hoping they would be three-time world champions by now as the next WIG was originally scheduled for last month in the Brazilian municipality of Rio de Janiero.

Because of the COVID-19 pandemic, however, those Games were postponed until October 2021.

Due to other commitments, including the fact she was playing for pro clubs in the United States and Australia, Boudreau did not participate in the first two WIG.

This explains why she’s eager to suit up for the NIFA squad at the 2021 Games.

“I’m definitely looking forward to the competition,” said Boudreau, who plays either as a striker or midfielder. “It’s definitely going to be an experience. It’s going to be interesting being around other Indigenous players from around the world.”

About 30 countries are expected to send representatives to the multi-sport competition.

Boudreau is no stranger to elite championships. She represented Canada at the women’s under-20 World Cup championships twice, in Russia in 2006 and in Chile in 2008.

After graduating from Louisiana State University in 2012, Boudreau embarked on her pro career, which included stints not only in Australia but with squads in Houston and San Diego.

Though she has not competed in the WIG before, Boudreau, who now lives in Saskatoon, did suit up for a NIFA team in the past. Back in 2010 she represented the association at a tournament in Vancouver.

Dano Thorne has been with NIFA since Day 1. He founded the organization back in 1991.

Thorne, a member of Cowichan Tribes who lives in Duncan, B.C., said although NIFA has included men’s and youth teams over the years, the women’s squad has been its flagship team.

He’s excited about the fact next year will mark the 30th year of operations for the NIFA women’s side and that the team will hopefully compete at the WIG.

Thorne is hoping many others are acquainted with the squad by next year.

Since NIFA’s inception, players have been responsible for their own expenses, travelling to various countries around the world for competitions.

“There’s still barriers and systems that exist that don’t recognize our program as they do for the mainstream organizations,” he said.

Some team members are now helping Thorne put together sponsorship packages, which will soon be distributed to contacts across the country.

Thorne is hoping corporate Canada jumps on the team’s bandwagon.

“I think they will, especially during this time of reconciliation and with the UN Declaration for Indigenous people,” he said.

Thorne estimates it will cost about $3,500 per player for the team to travel to Brazil next year.

He’s hoping fundraising efforts and sponsorships will alleviate some of these costs.

The NIFA squad, which consists of 22 players, was chosen this past January. The roster includes players from British Columbia, Alberta, Saskatchewan, Manitoba, Ontario, Quebec and the Northwest Territories.

The pandemic, however, has prevented team members from having any training sessions together this year.

Thorne is hoping to have all team players train together at various points in 2021, either in Vancouver or Winnipeg, before the WIG.

Two team members that are well acquainted with each other are sisters Misty and Amber Wells.

The sisters, members of Gitxsan Nation in B.C., both started playing soccer when they were four.

Amber Wells, a Grade 12 student at Hazelton Secondary School, is thrilled at the prospect of playing with her sister at a world championship.

“It would be pretty special,” she said. “But I’ve played with her on multiple occasions, like NAIG (North American Indigenous Games) and it was pretty special.”

The sisters helped the B.C. soccer entry capture the gold medal in the girls’ under-16 category at the 2017 NAIG, which were primarily held in Toronto.

Misty Wells, who recently moved to Kamloops, is not only looking forward to playing on the same club as her sister but with all of her NIFA teammates.

“I’m really excited to travel with the team to Brazil,” she said.