Wild draftee on pace for career season with Eagles 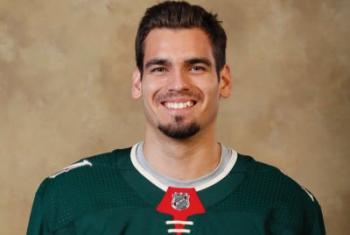 Shawn Boudrias is on pace to have his most productive season in his fifth and final year in the Quebec Major Junior Hockey League.

Boudrias, a 20-year-old Algonquin, is in his final year of junior eligibility.

He’s averaging more than a point per game with the Cape Breton Eagles, a squad which plays its home contests in Sydney, N.S.

Boudrias has racked up 38 points (19 goals and 19 assists) in his first 31 matches this season. He’s in third place in the team scoring race.

Should he remain healthy and continue to earn points at this rate, Boudrais will surprass the 60 points he registered in 60 games during the 2017-18 campaign, when he was a member of the Quebec-based Gatineau Olympiques.

Following his efforts that season, Boudrias, a right winger who is listed as 6-foot-5 and 223 pounds, was chosen by the Minnesota Wild in the 2018 National Hockey League’s Entry Draft.

Boudrias also began last season with the Olympiques before being traded midway through the year to the Cape Breton Screaming Eagles, who were rebranded as simply the Cape Breton Eagles prior to the 2019-20 campaign.

The Eagles are the third QMJHL that Boudrias has suited up for. He began his junior career during the 2015-16 season as a member of the Charlottetown Islanders.

Boudrias’ father Jason also toiled for three different QMJHL franchises during his junior days. The elder Boudrias had been drafted by the Florida Panthers in the 1984 NHL draft but never played a game in the league.

As for this season, Boudrias and his Cape Breton teammates entered their two-week holiday break sporting a 17-13-2-1 record. The Eagles are occupying fifth place in the league’s 10-club Eastern Conference.

The QMJHL also has an eight-squad Western Conference.

The Eagles will return to action after Christmas. The team’s next game is scheduled for Dec. 28, on the road against the host Halifax Mooseheads.