When one door closed another opened for Lamothe 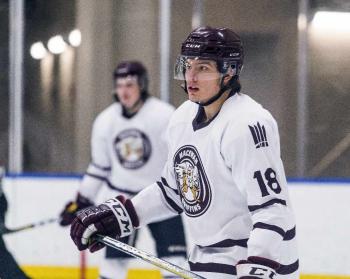 “Last year we won the league championship and it was the greatest feeling ever."

It’s not quite the way Nakehko Lamothe had envisioned his collegiate hockey career would play out, but the 22-year-old centre from Alberta’s Bigstone Cree Nation is certainly not complaining.

Lamothe is currently a key member of the MacEwan University Griffins, an Edmonton-based squad that competes in the Alberta Colleges Athletic Conference (ACAC).

During his junior days Lamothe, whose mother Lynn is Cree and father Kaia is Dene, had bounced around in four different junior leagues in Alberta, Manitoba and Saskatchewan. Then, shortly after completing his final junior season with the La Ronge Ice Wolves of the Saskatchewan Junior Hockey League, Lamothe signed on to play college hockey with Keyano College in Fort McMurray, Alta.

But a not-so-funny-thing happened to Lamothe shortly afterward. Though he was never contacted by any Keyano officials, he found out by reading an online post that the college was folding its men’s hockey program.

“I really wanted to continue my hockey career,” Lamothe said. So he opted not to attend Keyano just for his schooling. Instead he got in touch with hockey officials at MacEwan, another school he had applied to.

“They said they had a full roster,” Lamothe said. “But I thought I would come to MacEwan and go to an open tryout.” As it turned out, he didn’t have to do that.

Then Griffins’ coach Bram Stephen got in touch with Lamothe shortly after his initial contact and invited him to a summer skate. Though he had not initially recruited him, Stephen was impressed enough to add Lamothe to the MacEwan roster.

It ended up being a memorable season for Lamothe and his teammates.

“Last year we won the league championship and it was the greatest feeling ever,” he said.

Lamothe believes the Griffins are capable of defending their crown this season.

“We lost a few guys,” he said. “But we also gained some pretty good guys. I think we have a good chance to win the league again.”

With four regular season contests remaining, the Griffins are occupying third place in the eight-team ACAC with a 16-7-1-0.

The Northern Alberta Institute of Technology (NAIT) Ooks are atop the standings with a 20-2-1-1 mark. And MacEwan is just one point behind second-place Red Deer College, which is sporting a 16-6-2-0 record.

Lamothe has been impressed with the quality of play in the ACAC.

“We have guys in the league that played five years in the Western Hockey League,” he said. “And there’s guys that played Tier II Junior A. There’s also the odd guy that played in minor pro leagues like the ECHL and even the American Hockey League and they’ve come back to go to school and play in this league.”

Griffins’ interim head coach Mike Ringrose is pleased to have Lamothe on his roster.

“He’s playing as a checking centre for us,” Ringrose said of Lamothe, who has earned nine points, including six goals in 19 games this season. “He’s a high-energy player and he’s hard to play against. He’s consistently working in the hard ends of the ice.”

Lamothe, a 6-foot-3, 210-pounder, does not seem to mind if he’s not the one leading his club offensively.

“I just like to contribute any way I can,” he said.

Ringrose believes Lamothe is also setting a good example for his teammates.

“He’s the first guy at the rink and always the last guy off the ice,” he said.

Ringrose also thinks Lamothe, who is also a high academic achiever working towards his Bachelor of Science degree in Kinesiology, will become successful.

“He’s so focused and that’s going to open up a lot of doors for him because of how hard he works on and off the ice,” Ringrose said.

Ringrose added he’s confident, should he choose, Lamothe is capable of going on to play pro hockey, either in a North American minor pro circuit or in a league somewhere in Europe.

“The school part is great,” Lamothe said. “But I really like hockey. And I want to go as far as I can with that.”

For the past four off-seasons Lamothe has been returning home and training Indigenous youth in Calling Lake, next to the Bigstone Cree Nation.

“I try to teach them about nutrition,” he said. “I tell them what to eat and get them into the athlete’s mindset.”

He’s hoping a degree gives him additional clout to make up his own workouts and train individuals.

“I want to get my degree in Kinesiology so I am qualified to be that person,” he said.