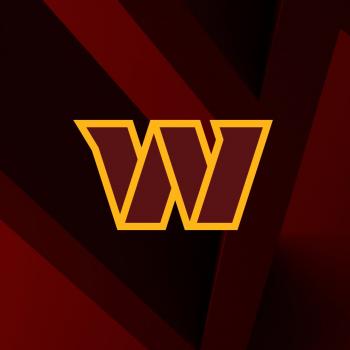 The new logo of the National Football League’s Washington Commanders.

“They have shown a lack of accountability for the unspeakable harm to our citizens that they accepted, perpetuated, and profited from. Without an apology, without any measure of accountability…” — Fawn Sharp, president of the National Congress of American Indians
By Sam Laskaris
Local Journalism Initiative Reporter
Windspeaker.com

Another North American professional football team has officially changed its name after years of repeated calls to do after using a moniker that denigrated Indigenous people.

On Wednesday, the National Football League’s Washington Commanders were introduced. The franchise had been simply dubbed the Washington Football Club for 18 months after team officials finally abandoned their previous name of Redskins.

Last June, a Canadian Football League in Alberta officially changed its name to Edmonton Elks after dropping its previous name of Eskimos, which had been utilized since 1949.

“As an organization, we are excited to rally and rise together as one under our new identity while paying homage to our local roots and what it means to represent the nation's capital,” said Dan Snyder, who is the Commanders’ co-owner and co-CEO. The former name and branding had been used from 1933 until 2020.

“As we kick off our 90th season, it is important for our organization and fans to pay tribute to our past traditions, history, legacy and the greats that came before us,” Snyder said. “We continue to honor and represent the burgundy and gold (the team’s colours) while forging a pathway to a new era in Washington. Today may mark the first day for the Washington Commanders, but we are and always will be Washington.”

Officials with the National Congress of American Indians (NCAI) said the franchise’s previous name was a racial slur and it had been trying for years to get team officials to change the name.

Despite Wednesday’s introduction of the Commanders, NCAI officials had concerns.

In fact, they were upset the Washington club utilized images of its previous branding while introducing its new name.

“Today, we are grateful for the end of a dark era, one in which the NFL and the Washington franchise commercially exploited and dehumanized Native people and culturally appropriated our most sacred practices,” said NCAI president Fawn Sharp.

Sharp said that Snyder and NFL commissioner Roger Goodell had previously promised NCAI officials they would apologize for the use of the club’s previous name.

“They have shown a lack of accountability for the unspeakable harm to our citizens that they accepted, perpetuated, and profited from,” Sharp said of Snyder and Goodell. “Without an apology, without any measure of accountability, and without fulfilling the honoured commitments they made to Tribal Nations in 2020 to right this wrong, the NFL and Snyder are simply ‘Commanding’ a continued course of open, intentional and profit-driven racism and erasure.”

Sharp added simply changing the club’s name does not close a chapter on the history of the Washington franchise.

“Until the behavior of the NFL and the franchise owners change, the league will continue to endure racism scandals, civil rights lawsuits, activist protests, and public relations embarrassments,” she said. “It’s time that both we and the public at large demand more. We have every intention to do our part and aggressively hold the NFL accountable for the harm caused. Much work remains. On behalf of Tribal Nations, we stand ready to share our vision for truth, reconciliation, and national healing.”

The NCAI has been advocating for the removal of offensive Indigenous names and mascots from sports and popular culture for more than half a century.

Despite the latest name change in pro sports, it is believed that some others are not planning to follow suit in the near future.

Those who many believe continue to have offensive names include the NFL’s Kansas City Chiefs, the Chicago Blackhawks of the National Hockey League and the Atlanta Braves, members of Major League Baseball.

Snyder’s wife Tanya, who is also the team’s co-owner and co-CEO, said some exhaustive work was done to reach the club’s new name.

“Through more than 40,000 fan submissions and countless surveys, focus groups and meetings, this 18-month rebrand process has been a collaborative effort with our fans, alumni, players and local DMV community, all leading to today as we embark on a new chapter in our legacy as the Washington Commanders,” she said.