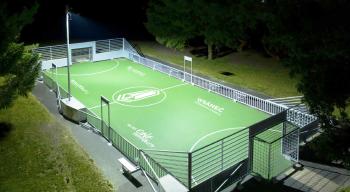 The soccer pitch to be donated to the W̱SÁNEĆ School Board will include fencing, lighting, goals and benches and will allow for five-a-side soccer. Photo courtesy Pacific FC.

“One of the mandates of Pacific FC and the Canadian Premier League is to support the growth of soccer on Vancouver Island and throughout the country.” — Curtis Olsen, the administrator of the W̱SÁNEĆ School Board
By Sam Laskaris
Local Journalism Initiative Reporter
Windspeaker.com

Thanks to a professional soccer club four First Nations and surrounding communities will benefit from a new soccer field.

Pacific FC, a squad based in Victoria, B.C. that competes in the Canadian-based Premier Soccer League (PSL), has donated a soccer pitch to the W̱SÁNEĆ School Board, which serves the Saanich people in four communities.

The field, suitable for five-on-five games, will benefit Tsartlip, Pauquachin, Tseycum and Tsawout First Nations and will be located in Brentwood Bay, B.C.

Details about the field donation were announced at a news conference this past week. The field is expected to be available for use by some point in October.

The field will be placed atop an existing box lacrosse facility.

“It’s a little bit run down and hard to maintain,” said Curtis Olsen, the administrator of the W̱SÁNEĆ board of the current venue.

The mini-field includes fencing, lighting, goals and benches and will allow for five-a-side soccer, which is becoming popular with both children and adults as it enables participants to get more touches of the ball with less running around on a bigger field.

Olsen said he first heard about Pacific FC’s field donation a few weeks ago. The soccer franchise originally got in touch with Dano Thorne, the founder of the Native Indian Football Association.

“They talked to Dano and expressed an interest in doing something in this area,” Olsen said.

The facility will be utilized by those at the W̱SÁNEĆ Leadership Secondary School as well as the adjacent elementary school.

“It will be available for the local community as well,” Olsen said of the new field.

Another bonus is that Pacific FC representatives are expected to make some visits to the field to offer various activities.

“Part of the agreement or plan is that players and coaches from Pacific FC will be coming here to interact with the kids,” Olsen said.

These interactions will include offering various soccer activities and outreach programs to the members of the First Nations.

“I think it’s awesome,” Olsen said. “It kind of goes full circle. By them coming into the community they make themselves more visible.”

Olsen, a huge soccer fan himself, has attended numerous Pacific FC matches. He believes once team players and officials start showing up for various events, then community members will be more likely to show interest in attending some of the team’s games.

Another positive that will result from the new field is that it can be used 12 months of the year.

The school board does have a soccer field now but it does not always remain open.

“It will be usable year-round,” Olsen said. “It works out great for us because we have a soccer pitch but it has poor drainage.”

As a result, that field, is usually closed from October through to late February or early March each year.

Rob Friend, the CEO of Pacific FC, is pleased his franchise was in a position where it could donate a field to the school board.

“One of the mandates of Pacific FC and the Canadian Premier League is to support the growth of soccer on Vancouver Island and throughout the country,” Friend said. “We are extremely passionate about this initiative and looking forward to a long-term partnership with the W̱SÁNEĆ community through the sport of soccer.”

“We are looking forward to the completion of this first mini-pitch and the opportunity to celebrate its opening,” he said. “We hope this is the first of many pitches we will launch increasing a lasting opportunity for sport and community for the next generation of Canadian soccer talent.”