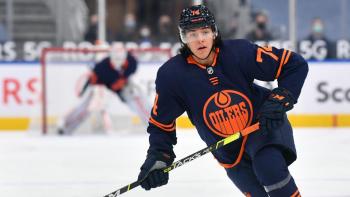 The Edmonton Oilers’ season ended earlier this week, but the National Hockey League squad and, in particular, its Indigenous defenceman Ethan Bear continue to fight an off-ice battle.

The Oilers were swept 4-0 by the Winnipeg Jets in their best-of-seven, first-round playoff series.

Winnipeg clinched the series with a 4-3 triple overtime victory in Game 4. That game began Monday night but because of its lengthy OT sessions was not completed until early Tuesday.

Afterwards, Bear, who is Cree from Ochapowace Nation in Saskatchewan, had racist comments directed at him via social media. Some felt he was to blame for the club’s Game 4 loss because of an untimely line change that led to the winning goal.

Bear’s girlfriend Lenasia Ned posted on her social media on Tuesday about the racist behaviour and comments Bear was receiving online.

“To hide behind a screen is cowardly,” she wrote. “But to use stereotypes against him as an Indigenous person is dehumanizing and awful.”

Ned also had praise for Bear, a 23-year-old who completed his second full season with the Oilers.

“Ethan has broken countless barriers as an Indigenous man to make it to the NHL,” she said. “He is human. We understand there is criticism but there is no room for racism.”

The Oilers’ organization issued a statement late Wednesday to show their support for Bear. But many wondered why it took so long to do.

“The Edmonton Oilers Hockey Club is disappointed in these disgusting, cowardly and racist remarks,” the statement began. “While we have witnessed progress in the area of equality and inclusion, this reprehensible behaviour demonstrates we still have significant work to do. Ethan Bear is an incredibly skilled hockey player and a beloved teammate. His community-minded efforts both here in Edmonton and in Saskatchewan represent the qualities any organization could possibly ask of its members.

“These comments also fly in the face of the work the organization has done to embrace reconciliation and build a strong and positive relationship with our Indigenous community. We call upon everyone in Oil Country to stand up to racism, call out hatred and do their part in making our community one of acceptance, inclusion and respect.”

He said he had only heard about the online abuse Bear was receiving shortly prior to his press conference.

Holland also raved about Bear as a hockey player and as a person.

“Ethan is an unbelievable young man,” he said. “He’s a tremendous role model for all young athletes and especially the Indigenous community.”

Bear himself issued a two-minute video on Wednesday evening.

“As you know, I’ve been subject to racist behaviour on social media,” he said. “I know this doesn’t represent all Oilers’ fans or hockey fans and I greatly appreciate all your support and love during this time.”

Bear added he will do his part to create change.

“There’s no place for racism in our communities, in sports or in our workplace. So, I call on all of us to help make change and to end racism. We all deserve to be treated fairly. And, at the end of the day, I think we’ll get there,” his video statement continued.

On Wednesday morning the Confederacy of Treaty Six First Nations Chiefs issued a news release not only condemning the racist and discriminatory comments made towards Bear. The release also expressed concern the Oilers’ organization had yet to respond.

“Our First Nations people are avid fans of hockey and the Edmonton Oilers and we are most proud of the athletic achievements of our people,” said Grand Chief Vernon Watchmaker. “Ethan has been a gracious ambassador to our youth, and he is very much a part of our communities.”

The website Hockey Indigenous, which promotes Indigenous players at all levels, also made a statement.

“We stand against the comments that are roaming around the spectrum in Ethan Bear’s name and are far more disappointed in the fans of the hockey world,” read part of the statement. “Shame on the people personally attacking him and taking this to an unnecessary extreme level, that is not humane and doesn’t belong in hockey.”

A couple of events are being planned to support Bear.

For starters, Naim Cardinal, who has gained some recognition for his hockey rookie card collection of every Indigenous individual who has played in the NHL, is receiving a fair bit of his attention to have tomorrow, May 28, become the first Indigenous Jersey Day.

He’s hoping as many people as possible will don a jersey of an Indigenous athlete to show their support.

On his social media Cardinal wrote it will be “a day where we recognize the hard work & barriers our warriors have overcome to become role models for Indigenous youth.”

For those that don’t have a jersey of an Indigenous player, Cardinal is hoping they can simply make a social media post and tag their favourite Indigenous athlete with #IndigenousJerseyDay.

Also, Oilers’ Superfan Magoo and Cree comedian Don Burnstick will be among those participating in a four-hour No Room for Racism Rally, which will be held Saturday outside of Edmonton’s arena, Rogers Place.