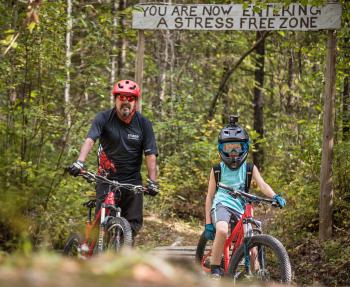 “It’s gotten a lot more attention than we thought it would. I think people are just looking to do something good and on their bikes.”
By Sam Laskaris
Local Journalism Initiative Reporter
Windspeaker.com

Tom Eustache just might have a lot more people show up for a celebration than he originally expected.

Eustache is the director of trails and public works for the Simpcw First Nation in British Columbia.

Simpcw is gearing up to host the Allies Mountain Bike Festival, a two-day event that will be staged April 29 and April 30.

Representatives from the First Nation decided to host the festival to showcase the 18 kilometres of mountain bike trails it offers.

A new stretch of trail, about one-kilometre long, is currently being constructed and is expected to open in time for the weekend.

“Our Nation is spread out a good chunk across British Columbia,” Eustache said. “There’s 15 communities that we have. We were hoping people from those communities would want to come out.” The Simpcw First Nation currently has about 700 members. Most of them live in the community of Chu Chua.

As it turns out, plenty of others have also expressed interest.

“We’ve had people calling us from as far away as Bella Coola,” Eustache said, adding an individual from that community, located about a nine-hour drive away, is keen to bring of group of youth mountain bikers to the event.

Eustache said he’s not surprised that many who have spent a lot of time over the past two years trying to stay safe and isolating from others are now keen to be part of some events with others.

The festival, however, is open to all. Eustache believes several non-Indigenous people will be among those who will be taking part.

And it’s not just mountain bikers being invited. Those who are looking to hike, run or walk the trails are also welcome.

Inquiries have also come from several others located numerous hours away. And there’s even been people who have been in touch from Colorado and Arizona to inquire about the Simpcw trails that are offered.

Festival organizers had originally thought they would be content to get 100 people out to their event.

But now with the interest being generated, it appears 200 or maybe even a lot more individuals could be showing up.

“I don’t want to overwhelm our community here,” said Eustache, adding Simpcw has only recently lifted some pandemic restrictions allowing visitors into the First Nation.

Eustache said Simpcw reps had been hoping to organize a mountain biking festival for some time.

“We had been planning something for a few years,” he said. “But with COVID happening, we haven’t been able to do anything.”

Members of Simpcw First Nation, including youth, were among those that helped build the trails.

The festival will include a barbecue on the second day where visitors can enjoy a meal with community members.

There will be a celebration involving Simpcw members performing various songs and leading talks about the First Nation’s history.

“I think it will be a gathering of a bunch of different people,” Eustache said. “We’ll just be getting it out there who we are as Simpcw people.”

The festival will also include showings of various mountain biking films.

Patrick Lucas, who founded the Indigenous Youth Mountain Bike Program in 2011, will be among those taking part in the festival.

The program has helped develop and build trails in various communities in B.C.

During the past half dozen years Lucas has helped Simpcw officials obtain about $500,000 in funding to build trails in their First Nation.

Like Eustache, Lucas is surprised at the number of people expressing interest in the festival.

“It’s gotten a lot more attention than we thought it would,” Lucas said. “I think people are just looking to do something good and on their bikes.”

Lucas is also hoping not just mountain bikers show up.

“The largest user group (of the Simpcw trails) is probably a women’s running group,” he said. “About 15 of them are running almost every day. I hope some of them come out. And I hope we get some walkers that weekend as well.”