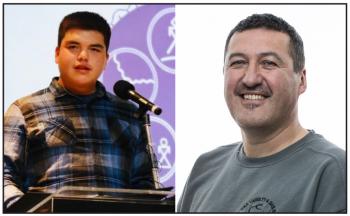 The battle of duelling Indigenous sports organizations in Ontario continues.

In one corner is the long-running Indigenous Sport & Wellness Ontario (ISWO), the designated Provincial/Territorial Aboriginal Sports Body (PTASB) for the province.

And in the other corner is the Indigenous Sports Body (ISB), a group launched a couple of years ago that is keen to become the sole association providing Indigenous sports programming throughout Ontario.

ISWO is currently receiving both provincial and federal funding to operate its programs.

As for the ISB, it has the backing of the Chiefs of Ontario, an organization representing 133 First Nations in the province.

On the opening day of the Chiefs of Ontario Special Chiefs Assembly Feb. 3 it was revealed that ISB now also has some financial support.

“I’m pleased to announce that we will be receiving up to $100,000 in funding to enable us to further advance the foundational work that we started two years ago,” said ISB co-chair Lance Copegog. “This is good news and will enable us to have the financial ability to conduct ourselves as a fully functional organization.”

Last week the Ontario government, through the Ministry of Heritage, Sport, Tourism and Culture Industries, which also provides ISWO with the majority of its funding, approved $100,000 in funding for the ISB.

Copegog said the ISB is currently the only Indigenous sports body in the province recognized by the Chiefs of Ontario, via a resolution in 2019.

“It is my hope the next time we stand here it will be to bring the good news that the Indigenous Sports Body has received its rightful recognition as the PTASB for Ontario,” Copegog said.

But Marc Laliberte, who has served as the ISWO president for 10 years, doubts that will happen.

That means only ISWO, formerly known as the Aboriginal Sport and Wellness Council of Ontario, is allowed to send Team Ontario representatives to the NAIG and the National Aboriginal Hockey Championships (NAHC), organized by the ASC.

Copegog said ISB reps will continued to lobby both the NAIG Council and the ASC in order to grant them recognition as Ontario’s recognized Indigenous sports body.

Laliberte said he’s not surprised that officials with the ISB continue to seek opportunities to provide programming and services already being supplied by ISWO.

“We’ve been dealing with this for some time now and we’ll continue to deal with it,” Laliberte said.

When he became ISWO’s president 10 years ago, Laliberte said his association was receiving about $200,000 annually from the provincial and federal governments.

In recent years, however, the funding has been bumped up to as much as $2 million per year.

“That’s what that group is after,” Laliberte said of the ISB.

Copegog denied this. “Our focus is not about their funding,” he said.

Copegog said the ISB was created as it was felt the ISWO was not providing adequate programming. The ISB, which is currently looking to fill some more seats on its board of directors, has a youthful board with members under the age of 29.

“We’re young people and we know what the needs are in our communities,” said Copegog, who is 19.

Besides its provincial funding, ISWO also receives some federal funding, via the Department of Canadian Heritage, which oversees sports, culture, media and the arts.

With the funding it receives, ISWO runs multi-sport and high-performance camps, and also stages tournaments and events, including provincial volleyball and basketball championships for Indigenous squads.

And it covers its expenses of hosting tryouts for Ontario teams that compete at both NAIG and the NAHC.

Because of the COVID-19 pandemic, Laliberte said ISWO has been unable to stage any camps or competitions.

But he said that, with the approval of both provincial and federal representatives, ISWO has taken portions of its allotted funding and diverted it to pandemic relief efforts.

For example, Laliberte said about five tonnes of potatoes have been delivered to about 10 Indigenous communities in northern Ontario.

These deliveries began last summer. A third batch of deliveries is in progress now.

Laliberte said both provincial and federal representatives are well aware that ISWO is diverting funds it is receiving to assist with pandemic relief efforts since it is unable to utilize the government money for its originally intended purposes.

While Laliberte is content for ISWO to continue receiving provincial and federal financial backing, he would have preferred to also have the blessing of the Chiefs of Ontario.

“They are a powerful organization,” he said, adding ISWO officials have been attempting to form a working relationship in recent years. “They basically distance themselves from us.”