Scotiabank to provide funding for mini-soccer pitches in Indigenous communities 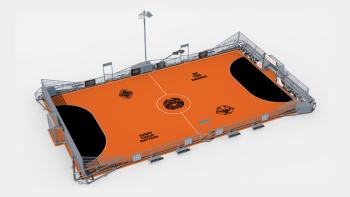 A concept drawing of what the mini-soccer pitches will look like.

“We’ve experienced incredible results and proof of concept with the first mini-pitch installation for Penelakut Tribe. We are very excited to bring these innovative, high quality and inspiring play environments to additional communities with the outstanding partners involved who are so deeply committed.” — Bill Yoachim, the co-founder of Hope and Health
By Sam Laskaris
Local Journalism Initiative Reporter
Windspeaker.com

And now Scotiabank is bringing a youth soccer program to Canada.

Indigenous communities in British Columbia will be the first to benefit from the program titled Scotiabank Futbol Club (Scotiabank FC).

At a recent news conference in Burnaby, B.C., it was announced that Scotiabank will provide $450,000 to an Indigenous-led organization called Hope and Health. This B.C.-based group works to ensure children reach their highest potential.

Funding will allow for the construction of six mini-soccer fields in Indigenous communities in B.C., and the location of the first two fields has been announced.

A pitch is already being constructed on Stz’uminus First Nation, located near Ladysmith, B.C. That field is expected to be completed this summer.

Snaw-Naw-As (Nanoose) First Nation will also get a field. Sites for the other four fields in B.C. will be announced at a later date.

The fields will provide additional infrastructure in the various communities and, once completed, they are expected to be enjoyed by more than 1,000 Indigenous youth each year.

Scotiabank FC has been successful in various Latin American countries since 2014. A total of 17 pitches have been built in Indigenous and marginalized communities throughout eight Latin American nations.

And now, Scotiabank thinks it’s an ideal time to invest in soccer in Canada.

“Generally, soccer is getting bigger and bigger in Canada,” said Stephen Gaskin, who is Scotiabank’s senior vice-president.

The Canadian women’s Olympic squad captured the gold medal at the 2020 Tokyo Olympics, which due to the pandemic were actually held last summer. And earlier this year the Canadian men’s soccer club qualified for the World Cup, which will begin this November and continues into December in Qatar. This marks the first time Canada will compete in the World Cup since 1986.

“The timing was perfect,” Gaskin said of the Scotiabank FC launch in Canada.

Besides providing the funding to build a half dozen fields in the province, Scotiabank has teamed up with a social impact company called One World Play Project to distribute 5,600 soccer balls across the country.

These balls, which will help eliminate any financial barriers to the sport, will be distributed via various organizations, including the United Way, YMCA and YWCA.

Besides the success of the Scotiabank FC program in Latin America, Gaskin said company officials were also moved to action by a mini-pitch that was built on Penelakut Island last year to be enjoyed by members of the Penelakut Tribe in B.C.

The Vancouver Whitecaps, members of Major League Soccer, provided some of the financial backing for that field.

“We saw that and we saw the impact of the program in Latin America,” Gaskin said.

Bill Yoachim, the co-founder of Hope and Health, said the Penelakut field has provided inspiration.

“We’ve experienced incredible results and proof of concept with the first mini-pitch installation for Penelakut Tribe,” he said. “We are very excited to bring these innovative, high quality and inspiring play environments to additional communities with the outstanding partners involved who are so deeply committed.”

Though the construction of mini-soccer fields have been announced only for B.C., Gaskin said “the hope is to have it roll out across Canada.”

But it’s too early to speculate on which provinces or territories will get fields next or how many will be constructed elsewhere.

“We haven’t finalized those plans yet,” Gaskin said, adding Scotiabank officials will first want to see what sort of success the program will have in B.C. before expanding it to other parts of the country.

Stephanie Labbe, a goaltender who led Canada to last year’s Olympic gold-medal performance, is among those throwing her support behind the Scotiabank FC launch in Canada.

“Soccer is an incredible sport and is growing at a rapid pace across the country,” she said. “I am happy to see that Scotiabank is getting involved in making soccer more accessible for more kids and communities in B.C.”