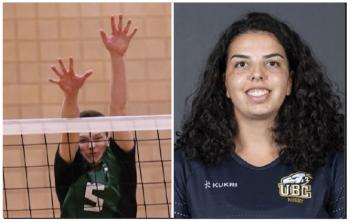 The Tom Longboat Awards are presented to the top Indigenous athletes in Canada each year.
By Sam Laskaris
Windspeaker.com Contributor
TORONTO

Winning a national award came at a perfect time for Lyric Atchison.

The 20-year-old rugby player, a member of the Squamish Nation in British Columbia, was selected as the 2019 female recipient of the Tom Longboat Award, annually presented to the top Indigenous athletes in Canada.

“It means a lot, especially right now,” Atchison said of her accolade. “It’s been a tough year for me right now as I injured myself.”

Cameron Gayleard, an 18-year-old Metis volleyball player who is currently a rookie on the men’s team at Canadian Mennonite University (CMU) in Winnipeg, was selected as the male winner of the Tom Longboat Award.

Both Atchison and Gayleard were recognized for their accomplishments during Canada’s Sports Hall of Fame induction ceremonies held in late October in Toronto.  The Tom Longboat Awards were established in 1951 to recognize Indigenous athletes in the country for their outstanding contributions to sport.

Atchison is in her third year on the University of British Columbia Thunderbirds women’s rugby squad. But she spent UBC’s entire fall season on the sidelines as she was injured in a pre-season game overseas.

And there’s also a chance her meniscus is torn.

“That’s undecided whether it’s torn or not,” said Atchison, who is studying Kinesiology at UBC.

Depending on the severity of tears, ACL and PCL injuries usually require surgery.

“They think it’s not surgical,” Atchison said of her ACL and PCL tears.

The goal is to have those tears heal through rest and rehab.

Atchison is not certain how long she will have to continue her rehab.

“I honestly don’t have a timeline at the moment,” she said. “My goal is to be back 100 per cent for the season next year.”

Unfortunately for Atchison, her knee injury occurred shortly after a highlight in her rugby career.

She represented Canada for the first time when she participated at the Tri-Nations Cup, a women’s under-20 tournament in England in August.

Atchison and her teammates defeated the United States in that event but lost to the host English side.

Though she was unable to suit up for the team, Atchison attended the majority of UBC’s regular season and playoff matches this year.

The Thunderbirds ended up winning their Canada West conference title this past month.

“That was the first time in program history,” Atchison said.

UBC also participated in its national championship, which concluded Sunday in Ottawa. The Thunderbirds were eliminated from further play after losing their quarter-final battle 26-24 against St. Francis Xavier University this past Friday.

Atchison, however, did not make the trip with her teammates to Ottawa.

Her trip to Toronto though to accept her Tom Longboat Award was welcomed.

“It’s a huge confidence boost and gives me more motivation to get back on to the field,” she said.

As for Gayleard, he was also thankful to receive his award.

“I’m really honored to be recognized at the national level,” he said.

During his Grade 10 year his junior varsity team won its provincial title. Gayleard also won a provincial crown in Grade 11 with the school’s varsity squad.

And in his graduating year, Gayleard, who was the team captain and later chosen as team MVP, led his club to the provincial finals.

His first-year CMU school commitments, however, prevented Gayleard from flying to Toronto to accept his Tom Longboat Award.

“It was a busy time at school as I had my mid-terms then,” said Gayleard, adding his mother Fidelia and sister Emily did attend the Toronto ceremony to accept the award on his behalf.

Gayleard is studying Science at CMU, a school that has an enrolment of about 1,000 students, making it even smaller than his high school which had 1,200 students.

“I love it,” he said of his university.

Gayleard has known for some time he wanted to be at the Winnipeg university.

Last December, while he was still in high school, he had been invited to participate in one of the team practices.

“I think it was then I knew I could fit it,” said Gayleard, adding he signed his letter of intent to attend CMU and play for its volleyball squad this past January.

Gayleard also had the opportunity to get another glimpse of being a student/athlete in university when he was allowed to sit on the CMU bench for one of its matches this past season.