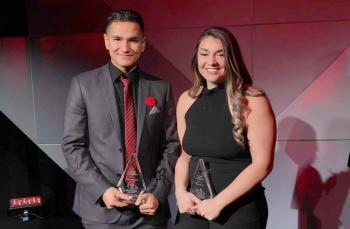 Greg Meconse and Meagan Wilson are this year's Indigenous coaches of the year.

“It was extremely humbling. It felt like this was the first step for our program. We’re hoping there’s much more to come.” — Meagan Wilson
By Sam Laskaris
Windspeaker.com Contributor
RICHMOND, B.C.

There’s a good chance Meagan Wilson will be paying closer attention to her Spam folder when checking emails in the future.

That’s because Wilson was unaware of an important recent email that had been sitting amongst the junk for a number of weeks.

Back in September Wilson, a 22-year-old who lives in the Six Nations community of Ohsweken, was notified she had won the Indigenous female coach of the year award.

That initial email also notified Wilson, a rugby coach, that tribute would be paid to her at a Coaching Association of Canada ceremony in Richmond, B.C. in November.

Three weeks later Wilson received another email, which went to her Inbox this time, asking if she would be attending the ceremony.

“I was super confused and I had to Google what was going on,” Wilson said. “And then I went back and found the first email in my Spam.”

Greg Meconse, a 23-year-old soccer coach from Winnipeg, is this year’s male Indigenous coach of the year.

Both Wilson and Meconse were honored at a ceremony Nov. 8 in Richmond, B.C., which was held in conjunction with a sport leadership conference.

The accolades, called the 2019 National Indigenous Coaching Awards, were selected by officials from the Aboriginal Sport Circle, the national body which governs Indigenous athletics.

Wilson, who started playing rugby while she was in high school at Brantford Collegiate Institute in Ontario, founded the Iroquois Roots Rugby program in 2017.

Wilson has taken her program to various First Nations throughout Ontario in the past two years to introduce rugby to Indigenous youth of all ages.

“We’ve been doing a lot of communities that we can drive to right now,” Wilson said.

Since the program’s inception, there have been nine community visits, the majority of them in 2018.

“We only did two or three this year,” Wilson said. “We had more of a focus on our competitive teams to get our name out there.”

Iroquois Roots Rugby, based out of Ohsweken, fielded under-18 female and male teams this season.

These two clubs participated in tournaments in Markham and Brantford. And they will also compete at an event in Orlando, Florida this coming April.

Wilson said Iroquois Roots Rugby is also looking to field under-15 teams, both female and male, in 2020.

“And then we will get back into doing more community visits,” Wilson said.

Wilson was obviously thrilled her work with the Iroquois Roots Rugby paid off with some national recognition.

“It was extremely humbling,” she said of her accolade. “It felt like this was the first step for our program. We’re hoping there’s much more to come.”

As part of their awards, Wilson and Meconse received a $1,500 bursary each.

“Part of it is going to go towards any (coaching) courses I need to get and towards furthering my coaching,” Wilson said.

Wilson played rugby for three years at her Brantford high school. For her Grade 12 year, however, she went to a private school in B.C., Shawinigan Lake School, on a full scholarship after school officials became aware of her rugby prowess.

Wilson will be returning to school in January. She will take social work classes at Wilfrid Laurier University’s Brantford campus.

Wilson is also one of the board directors for the newly-created Indigenous Sports Body, an Ontario-based group looking to offer athletic programs for Indigenous communities throughout the province.

As for Meconse, a member of the Pinaymootang First Nation in Manitoba, he was somewhat surprised to be chosen as this year’s top Indigenous male coach. That’s because he has only been coaching for one year.

“Being there made me look towards the future,” Meconse said of the ceremony in Richmond. “People were boosting me up and telling me to keep coaching.”

Besides coaching soccer at the community level in Winnipeg, Meconse will also be coaching the Manitoba male under-16 team at the 2020 North American Indigenous Games in Halifax next summer.

Meconse, who has Anishinabee and Cree ancestry, was also an accomplished soccer player himself.

He spent two seasons toiling with the University of Northern British Columbia men’s team. He also toiled one year with the men’s team at the Canadian Mennonite University in Winnipeg.

He was also hoping to suit up for the University of Winnipeg, where he is currently a student. But the university cancelled its men’s soccer program.