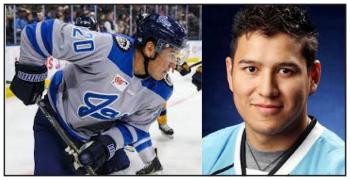 Besides serving as a role model for younger Indigenous hockey players in the Alberta, Wacey Rabbit is also hoping to inspire youth to be more physically active.
By Sam Laskaris
Local Journalism Initiative Reporter
Windspeaker.com

Officials with the Indigenous Sport Council of Alberta (ISCA) got a bit more than what they bargained for.

ISCA officials have been seeking some high-profile individuals lately in an effort to boost the awareness of their organization.

For starters, the governing body for Indigenous sports in Alberta, named Edmonton Oilers’ defenceman Ethan Bear as its ambassador for a fitness challenge it is currently running.

Brigette Lacquette, the first First Nations individual to play for the Canadian women’s hockey squad at the Winter Olympics, was appointed as the ambassador for ISCA’s family challenge, another event launched to promote physical activity during the pandemic.

ISCA also contacted Ashley Callingbull, a member of the Enoch Cree Nation, who in 2015 became the first Indigenous woman to win the Mrs. Universe title, to determine if she could also have some sort of role with the organization.

“We’re still talking with her to see how we can collaborate,” ISCA’s executive director Jacob Hendy said of Callingbull, who last month became a model and spokesperson for the Nike N7 organization, which supports physical activity programs in Indigenous communities.

Callingbull, however, is being credited with steering ISCA reps to another individual. She suggested Wacey Rabbit would be a good fit for the organization. Rabbit is a professional hockey player and a member of Kainai Nation (Blood Reserve).

“It’s just huge,” Hendy said. “He’s somebody that is very passionate and has the same values that we have. I know he wants to give back and do a lot of good.”

Rabbit, 33, is also looking forward to working with ISCA.

“I’m honoured and excited,” he said of his appointment.

Besides serving as a role model for younger Indigenous hockey players in the Alberta, Rabbit is also hoping to inspire youth to be more physically active.

“I’m going to try to get them involved in other sports too,” he said.

Rabbit had been selected by the Boston Bruins in the fifth round of the 2005 National Hockey League Entry Draft.

Though he has never played a game in the NHL, Rabbit has had a productive pro career. He’s suited up for five different minor pro squads in North America in the American Hockey League and the ECHL.

Plus, he has also travelled extensively abroad. During his career Rabbit played for pro squads in Austria, Croatia, Norway, Italy, Czech Republic, Japan and Romania.

He is currently gearing up for the 2020-21 hockey season where he will serve as a player/coach with the ECHL’s Jacksonville Icemen. He’s hoping pandemic restrictions will have been lifted in time for the ECHL regular season to commence in October.

Though he has yet to discuss it with Jacksonville team officials, Rabbit is thinking of various ways he can continue to be an ISCA ambassador during the hockey season.

“The Icemen are very good with their social media so I’d like to do something with them,” he said. “One thing I was thinking of was doing something like a 24-hour series behind the scenes of a professional hockey player. They would get to see what it takes to be a pro hockey player during the day and in meetings.”

Rabbit has spent portions of the past three seasons as a player/coach with the Icemen. He spent the first half of the 2019-20 campaign playing pro in Romania before returning to Jacksonville.

Though he’s a player/coach, Rabbit continues to play all games he can with the Jacksonville squad. His coaching responsibilities have been in practices and before matches where he has focused on improving the team’s power play and penalty killing units.

Besides keeping himself in shape for the upcoming hockey season, Rabbit is busy serving as an advisor for an expansion to the Kainai Junior B squad that will participate in the Heritage Junior Hockey League.

Though the squad is not exclusively for Indigenous players, Rabbit and other team officials are hoping the majority of those on the club’s roster will be Indigenous.

ISCA is also looking to add other high-profile Indigenous individuals born in Alberta to its list of sport ambassadors.