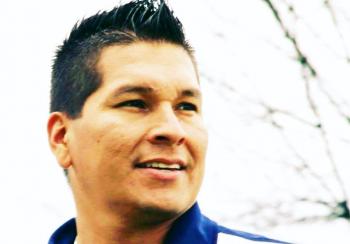 “We’ve already got some feedback from (other) provinces that want us to go there. I think we can start as early as next year with the expansion.” — Steve Tooshkening
By Sam Laskaris
Local Journalism Initiative Reporter
Windspeaker.com

Steve Tooshkening has spent the past 15 years introducing and teaching golf to Indigenous youth across Canada.

Now more than ever, Tooshkening believes more Indigenous youth will show an increased interest in the sport.

Tooshkening, a member Walpole Island First Nation, Bkejwanong Territory in southwestern Ontario, is planning to stage seven events in 2021 in various First Nations communities throughout Ontario through the Focus on the Fairway Series, which his company, ST. GOLF (ST being his initials), operates.

It was announced this past week that the Canadian Junior Golf Association (CJGA) has formed a partnership with ST. GOLF so Tooshkening’s company can bring the game to more Indigenous people throughout Canada.

“It opens up more doors,” Tooshkening said of his partnership with the CJGA. “It allows players to go to more clinics and gives them access to events they might not have.”

Tooshkening, 44, said he was fortunate during his youth that he was able to play in tournaments in Ontario cities, including Toronto, London and Windsor.

Tooshkening, who started golfing at the age of six, said he was lucky, unlike many other Indigenous youth, that he was able to enter various CJGA tournaments while he was growing up.

In fact, in the early ‘90s, he had a top four finish at the Ontario junior men’s (18 and under) tournament.

With his placing at that event, Tooshkening, who has Ojibwe, Pottawatomi and Lenapi ancestry, became a member of the provincial squad that participated at the national junior championships in Nova Scotia.

His participation in tournaments earned him some recognition as well as the opportunity to play golf at the college level.

Tooshkening ended up earning a spot with the men’s team at St. Clair County Community College, located in the Michigan city of Port Huron.

Upon his college graduation, Tooshkening turned pro. Though he once aspired to become a regular on the world’s most prestigious circuit, the PGA Tour, he never did make it to that level.

But Tooshkening is content with the accomplishments he did achieve as a pro.

After college he joined an Ontario-based development circuit called the Great Lakes Tour.

For a few years he also competed in a tour, which was restricted to players with Indigenous ancestry.

Tooshkening estimates he took part in as many as 20 events on the tour organized by the First Nations Golf Association.

This circuit is no longer in existence.

Tooshkening, however, still has fond memories of FNGA events as he registered several Top 10 finishes.

And one of his career highlights was winning the 2009 Oneida Open, an event that was part of the FNGA circuit that was held in Wisconsin.

His partnership with the CJGA will see a pilot project held at two courses in Ontario this year.

They are the MontHill Golf and Country Club in Caledonia, which is owned by businessmen from nearby Six Nations, and the Silver Creek Golf Course in northern Ontario, owned by the Garden River First Nation.

The MontHill event is being planned for July while the Silver Creek one is being considered for August.

A goal is to get as many Indigenous youth as possible to participate in the clinics and tournaments that will be staged.

A longer-term goal is to have these young players progress to provincial, regional, national and even international tournaments.

Events that are held in partnership with the CJGA will not be restricted, however, to just Indigenous players.

“The tournaments are going to be open to everybody,” said Earl Fritz, who was the founder of the CJGA in 1992 and continues to serve as its CEO. “We’re looking at the partnership from the standpoint of being able to provide opportunities for all kids.”

Fritz said he recalls first meeting Tooshkening when he played in youth tournaments, possibly when he was as young as 12.

“We’ve always kept in touch from the get-go,” Fritz said, adding he envisioned Tooshkening having a position of giving back to the game and being a role model for Indigenous players for quite some time now.

ST. GOLF and the CJGA are planning to expand their partnership into British Columbia and Alberta in the coming years.

“That’s the plan,” he said. “We’ve already got some feedback from (other) provinces that want us to go there. I think we can start as early as next year with the expansion.”

Tooshkening wasn’t the only member of his family to become a golf pro.

His sister Cheryl Mitchell competed in tournaments on the Symetra Tour, a circuit considered one stop below the prestigious LPGA Tour.

Those looking for more information on ST. GOLF or CJGA events he’ll be involved with can contact Tooshkening through his email at steve@stgolf.ca