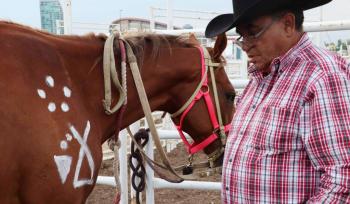 Pat Provost watches his team prepare their horses just before their race on July 9. Photo by Tawnya Plain Eagle.

To promote Indigenous publications and journalism, Windspeaker.com is pleased to republish this article from the Piikani Nation News with their permission.
By Tawnya Plain Eagle

While 17 thousand fans cheer on the evening show that is the Rangeland Derby, behind the shoots at the Greatest Outdoor Show On Earth sits two Piikani Nation teams preparing another night of the Indian Relay Races.

For the third year in a row Indian Relay teams from Piikani Nation have been invited to participate in The Calgary Stampede grandstand show.

“It’s really an honour to be here,” said Pat Provost, whose son is racing with Thunderbeings.

He recalls a time when Piikani Nation used to be booming with horse racing more than 50 years ago.

“When I was younger my dad and I trained horses and we raced them,” he says.

He said everyone would wait until the end of summer and gaining excitement to race their horses.

“We had fast horses, other reserves wanted to come and race that horse because it was winning,” he said.

However, in 1960’s the indian act saw the end of prohibition of alcohol which led to the beginning of the end of horse racing on the Piikani Nation.

“It just killed everything,” Provost said.

Now it is slowly regaining its popularity again with different teams from Piikani participating in The Calgary Stampede each year.

Anatapsii has been winning their races each night with the exception of the first night.

Tyrone Jackson has been Anatapsii’s jockey for the current season.

Their clean exchanges have been rewarding the team with wins, Jackson hopes they can continue that for the remaining races.