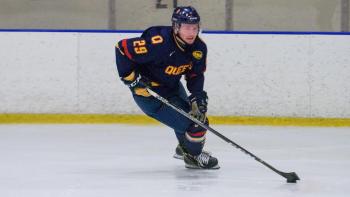 Jared Bethune has had an interesting hockey career.

The 22-year-old Ojibwe forward is currently in his second season with the Queen’s University Gaels, based in Kingston, Ont.

Bethune, who was born in the northern Ontario town of Fort Frances, played his high school hockey in Minnesota.

Besides racking up more than three points per game for his high school squad during the 2013-14 campaign, Bethune, a member of the Couchiching First Nation in Ontario, also suited up for six games that season with the Nebraska-based Lincoln Stars, members of the United States Hockey League (USHL).

The USHL is the top junior hockey league in the U.S.

Bethune also began the following season with the Stars and played three games with them before deciding to join the Prince George Cougars of the Western Hockey League (WHL).

He ended up spending four seasons with the Cougars, including his final year, 2017-18, with the British Columbia-based squad, when he averaged almost a point per outing.

Bethune ended up with 69 points (21 goals and 48 assists) in 71 regular games. When the Cougars didn’t qualify for the playoffs that year, he was able to continue his season by joining the Texas-based Allen Americans, a minor professional squad that competes in the ECHL, formerly known as the East Coast Hockey League.

Bethune appeared in nine regular season contests with the Americans and earned five assists in those appearances. He also played in seven playoff contests and netted his first pro goal.

But instead of continuing with a pro career, Bethune opted to return to school last season. He returned to his home province and suited up for the Gaels.

It turned out to be a memorable season for Bethune and his teammates as they ended up winning the Ontario men’s university championship.

Despite being a rookie with the club, Bethune ended up chipping in offensively with 15 points in 25 games.

The Gaels also participated in an eight-team national tournament this past March in Lethbridge, Alta.

Though they entered the Canadian championships seeded third, the Gaels were sent packing after losing their quarter-final outing against the Number 6 seed, Nova Scotia’s St. Francis Xavier X-Men.

As for this season, Bethune finds himself in second place in team scoring for the Gaels. He’s collected 11 points, including a team-high seven goals, in his first 17 matches.