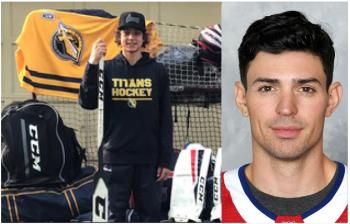 Ethan Kowatsch, and a photo of his hockey hero Carey Price.

This marks the fourth straight season that a Mississauga youth is collecting hockey equipment to donate to a northern Ontario First Nation.

And even the National Hockey League star who inspired this initiative is getting behind 14-year-old Ethan Kowatsch.

Kowatsch recalls watching the NHL Awards show back in 2015. When Montreal Canadiens’ goaltender Carey Price, who is Indigenous, was presented with the Hart Trophy as the league’s most valuable player, he talked about his community in Anahim Lake, B.C., a remote location where it is difficult to get any hockey equipment.

Price has stressed the importance of giving back to his community. And though he was just 10 at the time, Kowatsch decided to undertake a similar project in honour of Price, one of his hockey heroes.

This year marks the fourth season Kowatsch is collecting hockey equipment, which will be delivered to the Fort Albany First Nation, in northern Ontario. During the winter the community is only accessible by plane or ice roads.

Nearly 100 bags of equipment, including skates, sticks, jerseys, helmets, shoulder pads, goalie pads, neck guards and even jocks, were donated a year ago.

The equipment drive received a boost last week when Price himself promoted it on his own Facebook page.

“I didn’t believe it at first,” said Kowatsch, who was attending the first week of his Grade 9 classes at Mississauga’s Lorne Park Secondary School when he heard the news. “My mom sent me the screenshot of his Facebook page. I was blown away. And I was super excited and shocked.”

Kowatsch has never met or spoken to Price. He believes the NHL goaltender heard about his equipment drive after the Greater Toronto Hockey League (GTHL) posted about the venture on social media.

“I’m really happy he managed to promote this exercise,” said Kowatsch, who is also a goalie and is playing this season with the Toronto Titans’ Bantam AAA squad, which competes in the GTHL, the world’s largest youth hockey league.

Though he’s not sure how much effect Price’s promotion of the project has had, Kowatsch’s father Ken believes it is playing a factor into this year’s drive.

“It’s starting to take off,” he said. “People from places as far away as Barrie and Ottawa are getting in touch.”

During the first three years of his son’s equipment drive, donations primarily came in from Toronto and neighbouring communities.

Ken Kowatsch said people this year are also contacting the family as they want to make financial donations. He said the family, which does not mind storing all of the donated hockey equipment in its garage until it is time to be shipped to northern Ontario, is trying to determine how to best handle those who are keen to donate money.

Former Toronto Maple Leafs’ goaltender Paul Harrison, a native of Timmins, who is also a retired OPP officer, is among those who are assisting getting the donated equipment to the Fort Albany First Nation.

Ken Kowatsch said his son has not set an exact goal of how many equipment bags he would like to collect this season.

“His goal was to get more than last year,” said the elder Kowatsch.

Equipment will be collected during the months of September and October. The plan is to deliver all of the donated items to the Fort Albany First Nation in November.

The drive is off to a decent start this season. Seven bags of equipment were collected on Wednesday, as Kowatsch had requested items be brought to his first regular season match of the 2019-20 season.

“All my teammates have been helping out and they’re supporting me,” he said.

“I will for sure, as long as I can,” he said. “I love helping people in general.”

He also said he would consider helping out other First Nations if possible.

“I haven’t been in touch with any other communities,” he said.

As for his own hockey career, Kowatsch is hoping to follow in Price’s footsteps and eventually play in the NHL.

A more immediate goal would be to play in the Ontario Hockey League, the junior circuit considered one of the top feeder systems for the NHL.

Kowatsch would be eligible to be drafted into the OHL following his Minor Midget season of 2020-21.

“I would love to play in the OHL,” he said. “I think that would be a really good experience.”