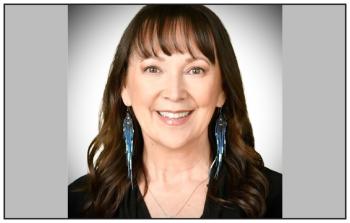 Fiona Kirkpatrick Parsons, board chair of the 2023 NAIG host society

“We can’t help but feel excited. We’ve never really lost steam. We just knew that at one point we would be hosting a Games. It was just a matter of when. And now that it’s one year away it feels like tomorrow. It’s going to go very, very quickly.” — Fiona Kirkpatrick Parsons
By Sam Laskaris
Local Journalism Initiative Reporter
Windspeaker.com

That’s one of the key announcements that was made on July 15 in Halifax as officials from the host society held a day of Indigenous culture and music to mark the one-year countdown to next year’s Games.

Last Friday’s festivities were held in partnership with the TD Halifax Jazz Festival.

Halifax and nearby Millbrook First Nation were originally scheduled to host the 2020 NAIG. But those Games were postponed twice because of the COVID-19 pandemic and are now set for July 15 to July 23 in 2023.

Fiona Kirkpatrick Parsons, the board chair of the 2023 NAIG host society, said all necessary funding to host the Games had been previously secured. Some money, however, was already spent in anticipation of staging the Games in 2020.

That’s why additional funding was welcomed.
“We’re in a great financial position,” Kirkpatrick Parsons said. “We’re set from that perspective.”

New funding including $750,000 from the Nova Scotia Gaming Corporation. Atlantic Lottery pledged $250,000 in support. And Deloitte Canada is providing $200,000 while the Atlantic First Nations Water Authority is contributing $75,000.

New funding will go towards the hosting and operations of the Games.

Also announced this past Friday was that host officials have kicked off their volunteer campaign.

A total of 3,000 volunteers are being sought to assist with various responsibilities. Those interested in helping out can sign up as volunteers via the website found at Home - NAIG (naig2023.com)

With financing in place, Kirkpatrick Parson said Games’ officials are now focusing on other logistics.

“We’ve hired our core staff and we will be expanding our staff in the next few months,” she said.

“And everything is going according to plan. There’s been no hitches so far.”

The chefs de mission from the 26 participating regions from across Canada and the United States held their second meeting this past week. The first one had been staged this past January.

More than 5,000 athletes and coaches are expected to participate in next year’s Games.

“Nobody had any questions,” Kirkpatrick Parsons said. “They were all very, very confident about all of the venues and the accommodations and everything we’ve got planned. It’s really just roll out the game plan as we are supposed to roll it out.”

Members of the host society have been working since 2018 when it was announced they had been awarded the Games for 2020.

“When we had to postpone it, it was very heartbreaking,” Kirkpatrick Parsons said. “I’m not going to lie. It was so hard on us all emotionally to have to put the brakes on. But we really quickly regrouped. We knew what we had to do.”

But now the Games are back on the agenda.

“We can’t help but feel excited. We’ve never really lost steam. We just knew that at one point we would be hosting a Games. It was just a matter of when. And now that it’s one year away it feels like tomorrow. It’s going to go very, very quickly.”

She added having additional time to prepare for the Games has been a blessing in some ways.

“I don’t want to call it a gift, but in a way I guess it’s been a bit of a gift,” she said. “You have to look at it that way. It’s not like we wanted this to happen. We didn’t want to have to postpone the Games. But we’ve decided to make the best of it.

“We’ve taken extra time to consider more engagement, more community engagement and what we’re going to do leading up to the Games.”

Kirkpatrick Parsons believes that the additional prep time will be beneficial in other ways as well.

“It’s given us a chance to do extra touches that quite frankly the other Games haven’t had the extra time to do,” she said. “So, we’re going to take full advantage of that extra time to see how  we are going to make these Games even better for the participants and for the spectators.

“If I was convinced we were going to host the best Games ever in 2020, I can tell you that I am triply convinced that we are going to have an amazing Games in 2023.”