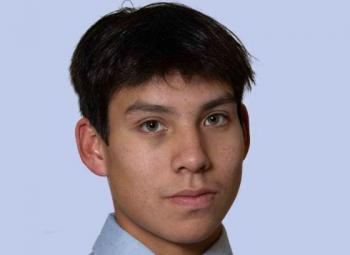 “It was just a COVID season. There wasn’t a lot of viewing for northern Ontario kids. He’s just one of those kids that fell through the cracks because of world events right now.” — Greater Sudbury Cubs’ general manager Jeff Forsyth
By Sam Laskaris
Local Journalism Initiative Reporter
Windspeaker.com

It’s not too often that a 16-year-old finds himself being a leader on a Junior A hockey team.

But that’s exactly what Billy Biedermann, a member of Moose Cree First Nation in northern Ontario, is doing this season.

Despite being a rookie, Biedermann has become one of the go-to guys for the Greater Sudbury Cubs, members of the Northern Ontario Junior Hockey League.

While many young newcomers on junior clubs battle for ice time and to stay in the lineup, Biedermann has been turning heads with his play all season long with the Cubs.

He’s second in team scoring, averaging almost a point per game. He had earned 24 points (12 goals and 12 assists) through his first 26 outings.

And the 5-foot-10, 160-pound centre currently finds himself playing on the top line for the Greater Sudbury squad.

“To be honest, I didn’t expect to do this well,” Biedermann said. “I did have high standards coming in this year. But I have exceeded expectations.”

No doubt Biedermann is keen to impress since he is hoping to play the sport at higher levels.

Because of the COVID-19 pandemic, he didn’t play any games during the 2020-21 season, a year he had hoped to catch the attention of scouts and then get drafted by an Ontario Hockey League (OHL) club.

But Biedermann was bypassed by all 20 teams in the OHL Priority Selection held this past June.

“It was just a COVID season,” said Cubs’ general manager Jeff Forsyth. “There wasn’t a lot of viewing for northern Ontario kids. He’s just one of those kids that fell through the cracks because of world events right now.”

Biedermann, who turns 17 on June 17, could technically still be chosen in this year’s OHL draft.

But in order for that to happen, officials from any OHL club would have to add him to the list of draft eligible players.

If he is indeed added to the list, then any squad could draft him. So, if any squad were to request Biedermann be included among potential draftees, it could tip off others that it is interested in his services.

Should he not be drafted, Biedermann would be a free agent and could attend any OHL training camp that he is invited to.

“I think there’s (OHL) interest in him right now,” Forsyth said. “I believe he’s skilled enough. It just depends on what a team’s needs are.”

Biedermann is also excelling off the ice. He has about an 85 per cent average in his Grade 11 studies at St. Charles College in Sudbury.

Should he continue to fare well on and off the ice, Biedermann will, no doubt, soon start to generate interest among American collegiate teams.

Biedermann said his first choice would be to play in the OHL next season. But he’s not ruling out a return to the Junior A ranks to maintain his eligibility to play in the U.S. collegiate level down the line.

Those who suit up for Major Junior franchises, like those in the OHL, are prohibited from accepting athletic scholarship offers from U.S. schools and then playing in the NCAA.

“It is something that has interested me,” Biedermann said of American university hockey. “But I don’t know too much about it.”
Forsyth had a pretty good idea what he was getting when Biedermann joined the Cubs this season.

Forsyth had coached Biedermann a few years ago on a squad in Sudbury when he was at the Under-13 (Major Peewee) level.

“I’ve been able to follow him over the years and I know what he brings to the team,” Forsyth said.

Forsyth is confident Biedermann is capable of playing at higher levels.

“I think he just has to stay the course,” he said. “He’s maturing off and on the ice.”

Though he’s focusing on his current campaign now, Biedermann is also looking ahead a bit. He’s hoping to bulk up during the off-season.

Biedermann and his teammates were also able to play their first match in some time on Thursday, Feb 3.

He had an assist as the Greater Sudbury club defeated the visiting Espanola Express 7-2. For the Cubs, it was their first game since Dec. 18.

Like other junior squads throughout Ontario, the Cubs had their season put on hold by the province which implemented various restrictions and lockdowns in order to deal with the latest wave of the pandemic.