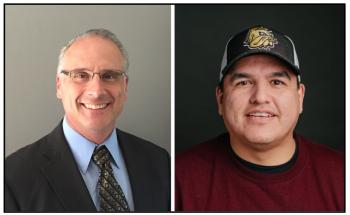 “We’re going to be trying to work with Trevor and have our players, our staff and our officials educated on Indigenous issues.” — Darrin Nicholas, commissioner of the Superior International Junior Hockey League
By Sam Laskaris
Local Journalism Initiative Reporter
Windspeaker.com

Trevor Iserhoff jumped at the opportunity when Darrin Nicholas offered him a new position.

Nicholas, commissioner of the Superior International Junior Hockey League (SIJHL), phoned Iserhoff, a 40-year-old member of Moose Cree First Nation in northern Ontario, to ask him if he’d be interested in becoming the SIJHL’s director of inclusion and diversity.

The news became official on Monday. The SIJHL initiative is part of a bigger strategy throughout the Canadian Junior Hockey League (CJHL), which consists of nine Junior A circuits across the country.

CJHL officials are keen to become leaders in diversity issues and take steps to eliminate all forms of racism while providing support to minority players in the sport.

“Darrin said I was the first person he thought of how he was going to ask,” Iserhoff said. “It’s a big honour for me.”

Iserhoff, who lives in Kenora, made his share of headlines last October when the Thunder Bay-based Kam River Fighting Walleye named him as their First Nations scout.

Iserhoff became the only CJHL scout assigned the specific task to seek out players from First Nations.

He will continue on with this role with the Fighting Walleye while taking on his SIJHL position.

Iserhoff will also represent the SIJHL by serving on the CJHL’s national diversity and inclusion committee.

It’s unknown how quickly other leagues across the country will be naming their own diversity and inclusion directors.

“Darrin just wanted to start things off quick,” Iserhoff said. “But I know the whole CJHL has come up with a plan, so eventually I know leagues will start implementing this plan they made up.”

The SIJHL currently consists of seven teams, including five in northern Ontario. Besides the Fighting Walleye, the other Ontario-based clubs are the Dryden Ice Dogs, Fort Frances Lakers, Red Lake Miners and Thunder Bay North Stars.

The SIJHL has already announced it will expand to eight franchises for the 2022-23 campaign when a team from Sioux Lookout in northern Ontario is added.

Nicholas believes it is important to bring in Iserhoff as the league’s director of inclusion and diversity.

“It’s something that maybe affects our league more than others,” Nicholas said. “There’s a huge Indigenous population in our part of the country that we draw players from. And we do have Indigenous players that find themselves onto our rosters.”

Nicholas said Hockey Canada, the sport’s governing body in the country, has been putting a lot of recent energy into diversity and inclusion initiatives.

“Now they’re asking the leagues to get more involved,” he said.

Iserhoff’s appointment is a step in that direction.

“We’re going to be trying to work with Trevor and have our players, our staff and our officials educated on Indigenous issues,” Nicholas said.

Iserhoff is not entirely certain of all the details of how his new role will play out.

“I’m sure I’ll be talking to teams about racism and the do’s and don’ts, keep in touch with them and if anybody has any questions or concerns they can reach out to me and I’ll help the player or the team with whatever issues that they have,” he said.

Iserhoff said his new position is for all minority players and not just Indigenous ones.

“It’s for everyone,” he said. “I know there are a lot of different backgrounds in the league. And I’m more than happy to help anyone that has issues on or off the ice.”

The SIJHL has yet to release its 2021-22 regular season schedule. But the league traditionally begins action in September.

Iserhoff is keen to get started with his new position.

“I love hockey and I want to give back to the game and I think this is just a perfect time for me to help out the league,” he said. “It would just be good for everyone to be on the same page and learn as one and move forward and try to eliminate racism and stereotyping and all the prejudice that comes with it. Unfortunately, it’s in hockey and I would love to see it gone from the game.”

Iserhoff added he believes he has several attributes that will assist him with his position.

“I played the game,” he said. “I’m a minority and I’m First Nations so I’d be able to understand what the players are going through. I also moved away from home to play hockey so I know what it takes and how the kid feels being homesick. I have teenagers now too so I think I would be able to talk to them as a former player and as kind of a parent role.”

Though he’s waiting for some league direction, Iserhoff believes he will start off by participating in phone or Zoom calls with SIJHL players and teams. There could possibly be some travel involved down the road.

“If a team wanted me to come and speak I would go and travel,” he said. “It would be something really neat to see and to experience, talking to each team about this program that the league is starting.”

Iserhoff is also eager to work alongside other inclusion and diversity directors who will sit on the national CJHL committee.

“That would be great,” he said. “I’d be more than happy to take whatever advice they have from their league and implement it into our league or have them take advice from me and use in their league. It would be good if we all worked together as one and totally helped the junior league be successful.”