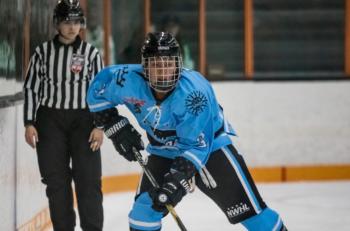 An Indigenous player finds herself among the league leaders in her first season of pro hockey in North America.

Brooke Stacey, a 23-year-old Mohawk forward from Kahnawake, Que., is a member of the Buffalo Beauts, which competes in the National Women’s Hockey League (NWHL).

Stacey has been averaging more than a point per outing early on this season. She’s netted six goals and added seven assists for 13 points in her first nine games.

Stacey is tied with two others in scoring for the Beauts. And she also finds herself in a seven-way tie for third place in the NWHL scoring race.

Though this is Stacey’s first season in the NWHL, she did have one year of pro experience prior to joining the Buffalo franchise.

Stacey then played 12 playoff games with the team, helping Linkoping advance to the league finals. She ended up scoring her second pro goal in the post-season.

As for this season, Stacey and her teammates find themselves occupying second place in the standings of the five-team NWHL thanks to their 5-4-1-0 record.

The Boston Pride is atop the standings as it has won its first 10 matches.

Other entrants in the league include the Minnesota Whitecaps, Connecticut Whale and the New Jersey-based Metropolitan Riveters.

Prior to turning pro Stacey had spent four seasons with the University of Maine Black Bears, an NCAA Division 1 team.

She was dominant in both her junior and senior seasons. Stacey had a career high 15 goals while also earning 13 assists for 28 points in 30 matches during her third year with the Black Bears.

And during her fourth and final season at Maine, she collected 30 points (13 goals and 17 assists) in 36 games.

Stacey also became a world champion as a teen. She was a member of the Canadian club that captured the gold medal at the world women’s under-18 tournament in Hungary in 2014.