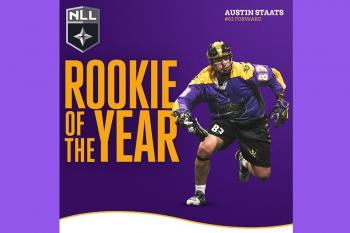 “I didn’t see any of the results of the voting but I think he was far and away the best rookie in the league this year.” — Seals’ head coach Patrick Merrill
By Sam Laskaris
Windspeaker.com Contributor
SAN DIEGO

Austin Staats certainly lived up to his pro hype.

Staats, a Mohawk from the Six Nations community of Ohsweken in Ontario, was selected first over-all by the San Diego Seals in the 2018 National Lacrosse League (NLL) Entry Draft this past fall.

Staats had an immediate impact in his first professional season. He led all NLL rookies in scoring with 61 points (32 goals and 29 assists) in 14 games.

He was still the league’s top point-getter among first-year players even though he missed the Seals’ last four regular season matches, sidelined with an ACL injury.

For his performances with the San Diego squad, Staats was named as the NLL’s rookie of the year. League award winners were announced this past Friday.

“It’s a true honour,” Staats said of his rookie accolade.

Like Staats, the Seals were also competing in their first season in the NLL.

Though he’s now thrilled to be playing pro lacrosse in California, Staats said his favourite NLL franchise growing up was the Buffalo Bandits.

His family had season tickets to the Bandits. He believes his earliest recollections from the Buffalo team are from when he was about eight.

“Of course, I always wanted to be a professional lacrosse player,” Staats said. “It ended up turning into reality for me.”

Staats said his rookie-of-the-year award didn’t catch him off guard, especially with the amount of points he was able to put up.

“The numbers don’t lie,” he said of his first-year stats.

Two others had also been nominated for the NLL’s top rookie award. They were Matt Rambo from the Philadelphia Wings and Ian MacKay from the Buffalo Bandits.

Rambo racked up 56 points (26 goals and 30 assists) while suiting up for 17 of the Wings’ regular season outings.

And MacKay, who appeared in all 18 of Buffalo’s regular season contests, earned 32 points (11 goals and 21 assists).

Seals’ head coach Patrick Merrill would have been surprised if somebody other than Staats had been chosen as the league’s top newcomer.

“I didn’t see any of the results of the voting but I think he was far and away the best rookie in the league this year,” Merrill said of his star forward.

Head coaches, general managers and members of the league’s Board of Governors voted on the various NLL awards.

“Individual awards are a nice form of recognition for our guys,” said Merrill, who is also the general manager of the San Diego squad. “And it’s great for Austin and for members of his family that he was able to win this.”

Merrill, a former NLL star himself, was well acquainted with Staats before he joined the Seals.

That’s because Merrill had coached Staats when he was a Junior A star with his hometown Six Nations Arrows.

Staats was a member of three national Minto Cup championships squads with the Arrows, in 2014, ’15 and ’17.

Staats had planned to return home to Ohsweken this summer to suit up for his final season of junior eligibility with the Arrows. He was also planning to play in the Premier Lacrosse League, a new U.S.-based pro field lacrosse circuit.

But those plans were nixed as he had knee surgery to repair his ACL 12 weeks ago. Though he returned home for a brief visit, Staats is spending his summer and fall in San Diego.

He’s going to physio five times per week and also doing some promotional work on behalf of the Seals.

Staats is hoping he’ll be ready to return to action by December when the NLL season starts up again.

Merrill believes his young star forward can return to the form he was in prior to his injury.

“We have a great medical staff,” he said. “And with today’s medicine, especially with younger guys, they can come back even stronger than before.”