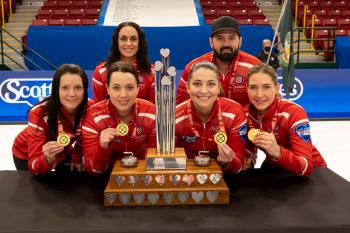 “To win once is hard, but to do it back-to-back-to-back is extremely hard. I’m so proud of my teammates, they’ve been unreal all week.” — Kerri Einarson
By Sam Laskaris
Local Journalism Initiative Reporter
Windspeaker.com

Kerri Einarson is hoping her next trip to Prince George, B.C. will prove more successful than her last one.

Einarson travelled to the city back in March 2020 to represent Canada at the world women’s curling championships.

Einarson, who is Métis, had skipped a team to its first national title earlier that year, but two days before the 2020 world tournament was scheduled to begin, organizers were forced to cancel the event because the COVID-19 pandemic had started spreading in Canada.

Fast forward to today and Einarson is a three-time defending national champion. She won her latest title on Sunday, guiding her Manitoba-based Gimli Curling Club squad to a 9-6 victory over the Krista McCarville-skipped team from Northern Ontario in the championship final.

This year’s national event, dubbed the Scotties Tournament of Hearts, was staged in Thunder Bay, Ont.

The reward for the Einarson squad is a trip to Prince George for the 2022 world women’s tournament set for March 19 to March 27.

Besides the desire to defend the national crown once again, Einarson said she had extra incentive at this year’s Canadian tournament knowing where the worlds would be held next month.

Einarson and her teammates managed to participate in the 2021 world tourney after winning their second Canadian championship.

That world tournament had originally been scheduled to be played in Switzerland. But after organizers opted to withdraw their hosting rights because of the ongoing pandemic, the event was moved to Calgary.

The tournament, which featured 14 participating countries, began in late April and ran until early May in a bubble, with no spectators allowed at matches.

Einarson’s club posted a 7-6 round-robin mark in that tournament and was eliminated after losing a playoff seeding match.

Now, Einarson is hoping to not only have the opportunity to play in Prince George next month but she’s eager to have her squad supported by a vocal crowd.

“Hopefully there will be fans,” said Einarson, who was selected as the 2021 recipient of a Tom Longboat Award for being Canada’s top female Indigenous athlete. “It was pretty disappointing when we were unable to compete last time.”

The rink is coached by Reid Carruthers, a former men’s world champion and a six-time Manitoba champ. Krysten Karwacki is the team’s alternate.

The Einarson rink had its share of struggles at various bonspiels during the 2021-22 season. It was announced last month that Carruthers would join the team as a coach for its nationals.

“I got off to a little bit of a rough start this season,” Einarson said. “And then we brought Reid on. He’s definitely kept things light for us and he’s been a good addition to our team.”

Einarson said after her latest national title, “It feels absolutely amazing. To win once is hard, but to do it back-to-back-to-back is extremely hard. I’m so proud of my teammates. They’ve been unreal all week.”

Einarson has now joined a prestigious list of other curlers. She is just the fourth athlete to skip a team to three straight national women’s championships.

Nova Scotia’s Colleen Jones is the record holder with four consecutive championships. She won her titles from 2001 through 2004.

Like Einarson, others who captured three titles in a row are Jennifer Jones of Manitoba and Saskatchewan’s Vera Pezer.

Einarson’s team posted a perfect 8-0 record in round-robin action at this year’s national tournament. But the club lost its opening playoff seeding match. By losing the contest, the squad then had to win three straight games in order to secure another Canadian crown.

“Give it to my team. They played absolutely amazing all week,” Einarson said.

For her efforts in the tournament’s playoff rounds, Einarson was presented with the Sandra Schmirler Most Valuable Player award.  This marked the third straight year Einarson nabbed the MVP award.

Einarson had some praise for her opponents in Sunday’s championship final.

“They’re a wonderful team and they make a ton of shots,” she said of the McCarville rink. “We knew we had to make all of our shots.”