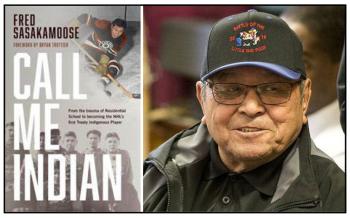 Fred Sasakamoose (right) and the cover of his memoir Call Me Indian.

“The legacy that Fred has left on the ice is really important and lasting but everything he has done after retiring is monumental.” —Seven-time Stanley Cup champion Bryan Trottier
By Sam Laskaris
Local Journalism Initiative Reporter
Windspeaker.com

The expression ‘home is where the heart is’ certainly applied to Fred Sasakamoose.

He is remembered by many as a hockey star. He became the first player with treaty status to make it to the National Hockey League, suiting up for 11 games with the Chicago Blackhawks during the 1953-54 season.

But by reading Sasakamoose’s memoir titled Call Me Indian, released this past month, readers discover his life was about much more than hockey.

Toronto writer Meg Masters helped Sasakamoose write his memoir. The book was completed before Sasakamoose, who was 86, died this past November in a hospital in Prince Albert, Sask. from COVID-19 complications.

Sasakamoose was a residential school survivor. He went on to serve as the chief of Ahtahkakoop Cree Nation (formerly Sandy Lake Indian Band) in Saskatchewan after spending 35 years as a councillor for the First Nation. He was a huge advocate of youth sports. And he became a member of the Order of Canada in 2017.

In the epilogue of Call Me Indian, Sasakamoose wrote about where his heart truly was.

“Ever since I was taken away when I was seven, all I wanted to do was go home, to be in the arms of this land,” he wrote. “No matter how comfortable I became in Moose Jaw. No matter how much I dreamed of an NHL career. In Toronto, Chicago, New York, with all the lights and excitement. Standing toe to toe, at centre ice, looking my hockey heroes in the eyes. Flying over the big ice while tens of thousands of people watched.

“All that time, part of me was back here, in Sandy Lake. Back where my mother and father lived. Back where my moosum held my hand during those long, silent walks. I always felt this place was waiting for me. Always.”

Sasakamoose wrote he doesn’t remember much of what happened on the day he deemed the beginning of that last day of his childhood. He was seven. His brother Frank was two years older. Both were taken away from their family and sent to residential school.

“Everything is a bit cloudy until the moment a huge canvas-covered grain truck appears in front of our little cabin,” Sasakamoose said. “Three men get out of the cab. One I recognize, the reserve’s Indian agent. Another is wearing a uniform. An RCMP officer. And the third is a pale white man with a hard face. He is wearing a long black robe that billows slightly behind him as he walks.

“He’s talking to my mother and my father is coming around to the front of the cabin, but I can’t make out what anyone is saying. All I can hear is the sharp, jagged sound of crying. Crying children. It’s coming from under the canvas of the truck.”

Within seconds Sasakamoose and his brother are forced to join the other children. And after a terrifying trek, the Sasakamoose boys and about 30 others, who were squeezed into the truck with them, arrive at the St. Michael’s Indian Industrial Residential School in Duck Lake.

Though, like others, he was abused at the school, Sasakamoose blossomed into a talented hockey player.

He left the school at age 15 and joined the Moose Jaw Warriors’ junior club, a franchise of which he would become the captain.

But even while he was excitedly preparing for his first NHL game with the Blackhawks, Sasakamoose couldn’t help but think of his enjoyable early years of life at his real home.

“To me, Chicago was pure chaos,” he said. “The streets were choked with cars. Horns honked every minute. The sidewalks were crammed with people – who walked within inches of each other even though they were perfect strangers…It wasn’t just the buildings and all the people that made the city feel different than anywhere I had been before. The air itself was foreign – grey and heavy with soot. It smelled of car exhaust and something else I didn’t recognize.”

Seven-time Stanley Cup champion Bryan Trottier, who has Cree, Chippewa and Métis ancestry, wrote the foreword for Call Me Indian. Trottier summed up the importance of getting Sasakamoose’s memoir out into the public domain.

“We are all so lucky that Fred decided to write some of his stories down in this memoir, so we can return to them again and again,” Trottier wrote. “The legacy that Fred has left on the ice is really important and lasting but everything he has done after retiring is monumental.

“He inspires so many people and takes the time to make everyone feel important. He takes such pride in being Cree, it’s infectious. It makes us all proud to be First Nations.”