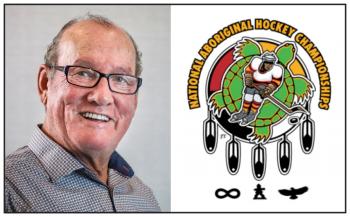 “Membertou hosted an extremely successful championship in 2018 and the ASC has great confidence that Membertou will host a fantastic event in May 2022.” —Rob Newman, Aboriginal Sport Circle president
By Sam Laskaris
Local Journalism Initiative Reporter
Windspeaker.com

Officials with the Membertou First Nation are ready for their encore.

But it’s arriving just a bit earlier than they had originally anticipated.

The Mi’kmaq Nation, which is located on Cape Breton Island in Nova Scotia, successfully hosted the 2018 National Aboriginal Hockey Championships (NAHC).
“We applied right away to host it again, getting in line,” said Membertou Chief Terry Paul, adding his First Nation was hoping perhaps it would take five years to be awarded NAHC hosting rights again.

Because of the COVID-19 pandemic, both the 2020 and 2021 national tournaments were cancelled.

Regina was supposed to host the 2022 tourney. But because of ongoing COVID concerns in Saskatchewan, officials from Regina recently announced they were not interested in organizing next year’s scheduled event any longer.

Following the Regina withdrawal as the host city, ASC reps staged an emergency meeting and decided to ask Membertou officials if they would be interested in taking on next May’s event.

The answer was yes. And an official announcement that Membertou will serve as host was made on Oct. 27.

The chief said he’s keen to welcome back the teenage elite hockey players, as well as their support staff and families to his community.

About 500 players are expected to take part in next year’s championships.

Tournament dates have been set for May 7 to May 14. Matches will be staged at the Membertou Sport and Wellness Centre.

The NAHC traditionally features about 16 to 20 teams competing in both girls’ and boys’ divisions.

The majority of players for the squads, which represent provinces, territories or regions from across the country, are ages 13 to 17.

Except for the past two years when the pandemic forced the cancelation of the tournament, the NAHC has been staged annually since its inception in 2002.

In previous editions of the tourney, some Atlantic provinces have iced their own squads. But there have also been years when Team Atlantic entries have competed, featuring players from Nova Scotia, New Brunswick, Prince Edward Island, as well as Newfoundland and Labrador.

For next year’s event, there will be Team Atlantic clubs in both the girls’ and boys’ divisions.

Paul said he anticipates there will be at least one player from Membertou First Nation on both of the Atlantic clubs.

Team Atlantic tryout dates have yet to be announced. Paul said various tryouts might be held in different provinces.

“They know the players,” Paul added of those who will organize the Team Atlantic squads. “They know them pretty well. And they scout them.”

Paul said he anticipates both of the Atlantic squads will be competitive at the 2022 tournament.

Winning some hardware, however, might be a difficult chore.

“The teams that come from away are really, really good,” said Paul, who attended numerous contests at the 2018 national tourney.

Whitehorse hosted the last NAHC, in 2019. Saskatchewan won the girls’ category at that event while Manitoba took home the gold medal in the boys’ division.

Manitoba and Ontario ended up winning the silver and bronze medals, respectively, in the girls’ grouping. And in the boys’ division, Saskatchewan placed second while British Columbia finished third.

Paul said plenty of off-ice preparations are also required to host next May’s event. He estimates about 100 volunteers will be required to help out with various aspects of the tournament.

Fortunately, Membertou officials have a jump on that as they had a list of those who assisted in 2018.

“We’ve got a lot of the old ones that are coming back,” Paul said. “And I’m sure we’ll have enough volunteers to put on a really good event.”

Jeff Spencer, the chair of the ASC’s hockey committee, is thrilled Membertou accepted to serve as hosts again on relatively short notice.

“I want to thank Chief Terry Paul and the Membertou First Nation for ensuring the championships are not missed for a third straight year and for welcoming us to their traditional territory,” Spencer said. “We are excited to be returning to Membertou in 2022.”

“Membertou hosted an extremely successful championship in 2018 and the ASC has great confidence that Membertou will host a fantastic event in May 2022,” he said.