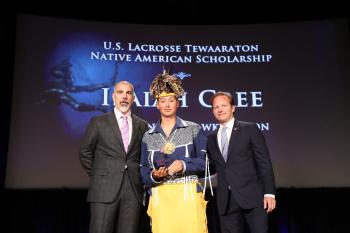 “I just want to get healthy and hopefully be ready to play in the playoffs.” —Isaiah Storm Cree
By Sam Laskaris
Windspeaker.com Contributor
MONTREAL

Cree, a 19-year-old from the Mohawk territory of Akwesasne, had a number of American Division 1 schools pursuing him. Instead of heading to the NCAA ranks south of the border though, Cree has decided to head to Montreal and attend McGill.

Besides studying business at McGill, Cree will eventually suit up for the school’s varsity team, which competes in the Canadian University Field Lacrosse Association.

An April knee surgery to repair a torn ACL, however, might prevent Cree from participating in McGill’s 2019 fall campaign. But if his rehab progresses well, he’s hopeful he will be available for the post-season this year.

Akwesasne is a unique community as its borders are not only within the provinces of Ontario and Quebec, but dip into the U.S. at the state of New York.

Cree primarily grew up on the American side of Akwesasne. But he moved around quite a bit as a youngster and spent time living with relatives in both Ontario and Quebec.

Cree spent his first two years of high school in Massena, N.Y. And then for his last two years he’s been playing for Sierra Canyon School, a California-based private school located in the Los Angeles suburb of Chatsworth.

“He contacted me directly last fall,” Murdoch said. “I think it’s because of the proximity to his home and the academic excellence of McGill. I think his family truly values education. All these things added up for us.”

Cree said the solid education he will receive at the Montreal school is the main reason he chose McGill.

“I wanted that over the athletics,” he said.

Landing Cree is a bit of a coup for McGill. That’s because last week Cree was presented with his award for being the male recipient of the prestigious Tewaaraton Native American Scholarship.

U.S. Lacrosse annually recognizes male and female high school students of Haudenosaunee/Iroquois heritage. Winners, selected for their character, academic marks and leadership on and off the field, receive $10,000 each, spread out over the first two years of their post-secondary education.

Murdoch believes it might be a blessing in disguise for Cree if he is unable to suit up for McGill in his first year.

“I think it will give him a chance to get acclimated to the school and let him focus on his rehab,” he said. “Realistically, ACL surgery is a six-month to 12-month recovery. It depends on how things go for him, but I don’t think he would be playing in the fall. It would be too soon after surgery.”

Cree has accepted the fact he will begin his university career on the injured list.

“It’s fine,” he said. “I’m not going to be bummed out about it. I just want to get healthy and hopefully be ready to play in the playoffs.”

Murdoch anticipates Cree will have an immediate impact with the McGill squad once he does start playing.

“A healthy Isaiah Cree would be challenging for a starting position as a freshman,” Murdoch said.

That’s a huge testament to Cree’s abilities since McGill is expected to have about 40 returnees on its roster this coming season.

Cree said winning the Tewaarton Native American Scholarship was a surprise for him. That’s because he only suited up for five games for Sierra Canyon School this year before suffering his knee injury.

“I knew there were a lot of great guys up for that award,” he said. “There were people that had better marks than me. And I didn’t play that much this year (because of my injury).”

Cree, who plays the attack position, likes the fact he’ll be attending a university close to home. Akwesasne is about a 90-minute drive to Montreal.

And this won’t be the first time Cree will be playing for a Canadian squad. He played three years – while he was in Grades 7 through 9 – for the Ottawa Capitals, an organization that puts together travel lacrosse teams which participate in various tournaments, primarily in the U.S.

Cree will be one of five Indigenous players on the McGill roster this coming year.