Massive First Nations golf tournament to be held in Ponoka 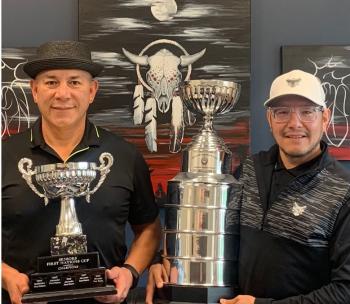 Wayne Wood (left) and Cordell Makokis are excited about the All Nations Cup. Makokis is holding a new trophy called the Senior Stanley Cup to be handed out at the tournament.

A bit of history is expected to be made in the central Alberta town of Ponoka next week.

The inaugural All Nations Cup will be staged over six days at the Wolf Creek Golf Resort.

The tournament, which is restricted to golfers with First Nations ancestry, is expected to feature more than 570 participants.

With that many entrants, the event is expected to be not only the largest Indigenous golf tournament ever in Alberta, but in Canada as well.

“To the best of my knowledge there has never been a golf tournament with so many competitors,” said Wayne Wood, the president of Warrior Golf, a company which is organizing next week’s event.  “It’s going to be a crazy busy week.”

Though the majority of the competitors will be from Alberta, the event will also include representatives from Saskatchewan and Ontario.

There will be no individual play in this tournament. Instead, all participants will play in a Scramble format, on two-person teams for juniors and four-person and six-person squads for women’s and men’s divisions, respectively.

Playing with the Scramble format all golfers hit their own tee shots and then all players from that team will hit their next shots from the location landing they like best from a team member’s previous shot.

“It’s a little less intimidating for everybody (on a team),” Wood said.

Action will commence this Sunday, July 25, when junior divisions will be contested. Golfers will be divided up into under-13, under-16 and under-18 categories.

Then, from July 26 to July 28, both the open women’s and open men’s divisions will be staged for those 18 and over.

Groupings for seniors will then be contested July 28 to July 30. There will be senior women’s and senior men’s divisions for those ages 50 and over. And there will also be a super senior men’s category for those who are 61 and over.

Organizers prefer that all competitors on the same team represent the same First Nation.

Wood said the rules can be modified somewhat to accommodate those teams that cannot complete a team with players from the same First Nation.

But those squads that do include a golfer from another First Nation are not eligible to have their point totals count towards the overall All Nations Cup Community Championship.

More than 30 First Nations will be represented at the tournament.

Wood operates Warrior Golf along with his two nephews, Cordell Makokis and Jeremy Makokis. All three are members of Saddle Lake Cree Nation in Alberta.

Wood is shocked at the number of participants the All Nations Cup has attracted.

“We didn’t think we’d get anywhere near this number,” he said. “We thought we’d maybe get 150 people.”

Warrior Golf has been operating tournaments since its inception in 2011.

Wood, however, has been organizing golf events even longer than that. Back in 2003 he started running a senior’s event which featured just two men’s teams from Saddle Lake Cree Nation and two other squads from Alexander First Nation.

That event continued to be held annually up until last year when the COVID-19 pandemic prevented a 2020 tournament from being held.

That senior men’s event is now just one of the divisions in the new All Nations Cup tournament.

“Right from the beginning we said that no drugs and no alcohol will be allowed at our events,” Wood said. “That is still the case.”

The senior’s tournament traditionally was held in a different location each year.

Wood, however, believes the All Nations Cup just might have to continue to be held at Wolf Creek Golf Resort for logistical reasons.

The facility features 36 holes of golf, double the number of holes at most venues.

“You don’t have much choice in that aspect,” Wood said. “We need 36 holes for the number of golfers that we’re going to have.”

Competitors will be vying for a share of about $150,000 in cash prizes at this year’s event.

Wood said Warrior Golf traditionally likes to award about half of its registration fees back to prize winners.

Those in the junior divisions at this tournament are required to pay a $125 registration fee per golfer.

Though junior golfers are not eligible for cash prizes, the top finishers in each division will be awarded gift certificates.

Tournament organizers will also cover the registration fees for the top two finishers in each age grouping for a future event on the McLennan Ross Alberta Junior Tour.

Registration fees for those in the open, senior and super senior divisions range from $2,000 to $4,000 per team.