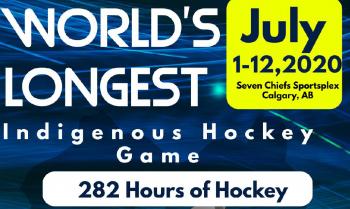 “We’re encouraging people who are 25-45, give or take, to apply. Most importantly they have to be in great physical shape.” — Lee Francoeur
By Sam Laskaris
Windspeaker.com Contributor
TSUUT’INA NATION, Alta.

Organizers of a 2020 hockey game in an Indigenous community are hoping to not only establish a world record but also further reconciliation.

An event being billed as the World’s Longest Indigenous Hockey Game is scheduled to take place next summer from July 1 to July 12.

The goal is to play for 282 consecutive hours at the 7 Chiefs Sportsplex and Chief Jim Starlight Centre, which opened earlier this year in Tsuut’ina Nation, Alberta.

Forty individuals playing four-hour shifts are expected to take part in the marathon match. They’ll be representing either Team Hope or Team Unity.

Should they indeed manage to last for 282 hours, participants would earn a spot in the Guinness Book of World Records for the longest hockey game.

The current world record of 251 hours and seven minutes, was established last year by a group, also in Alberta, which was raising money for pediatric cancer research and equipment.

The World’s Longest Indigenous Hockey Game is also serving as a fundraiser. Organizers are hoping to raise at least $2 million.

Proceeds from the match would be split among the Alberta Children's Hospital Foundation, Heart and Stroke Foundation, KidSport and WIN Sport International.

Lee Francoeur, one of the organizers of next year’s marathon match, believes corporate Canada will support the venture.

“I think they will have to,” he said. “They need to wake up because it’s been 200 years of colonization, oppression and residential schools, which were created to dispossess Indigenous people of their resources.”

Francoeur is confident businesses will jump on board and support next year’s game in part because of the Call to Action Number 92 from the Truth and Reconciliation Commission.

This call to action states: “We call upon the corporate sector in Canada to adopt the United Nations Declaration on the Rights of Indigenous Peoples as a reconciliation framework and to apply its principles, norms, and standards to corporate policy and core operational activities involving Indigenous peoples and their lands and resources.”

Francoeur, a lawyer and a member of British Columbia’s Taku River Tlingit First Nation, played in a 2012 marathon game lasting 246 hours in Chestermere, Alta., which raised funds for the Alberta Children’s Hospital Foundation.

Besides helping to organize next year’s contest, Francoeur plans to step in and play if need be.

“I think I’m going to get in shape and put myself on the registered player roster,” he said, adding he plans to be an emergency fill-in if another individual gets injured during the lengthy game and is unable to continue.

Organizers have already started accepting applications from those wishing to compete in next year’s game.

Details are available at www.wlihg.com

Officials are already vetting players who have sent in applications.

“We’re encouraging people who are 25-45, give or take, to apply,” Francoeur said. “Most importantly they have to be in great physical shape.”

The proposed match already has the backing of the world-renowned Calgary Stampede, which in 2020 will run from July 3 to July 12.

Stampede officials have already agreed to broadcast the hockey game on a Jumbotron. And game officials will show Calgary Stampede activities on a screen at the Tsuut’ina rink.

Francoeur is hoping some of the Stampede sponsors will also make financial contributions to the marathon hockey match.

“We’re telling people this game is coming and you need to get on board,” he said. “As much as possible we want to do that cross branding.”

Lesley Plumley, the event producer of the World’s Longest Indigenous Hockey Game, said a marathon youth ball hockey match is also being planned in conjunction with the contest.

That game will be held outdoor, on one of the three pads at the Tsuut’ina facility.

“I think it’s a big statement to teach the youth about reconciliation,” she said.

Plumley said officials are also hoping to establish a world record for the longest ball hockey game. There is no existing record now.

“If we can do 10 hours that would be great,” Plumley said. 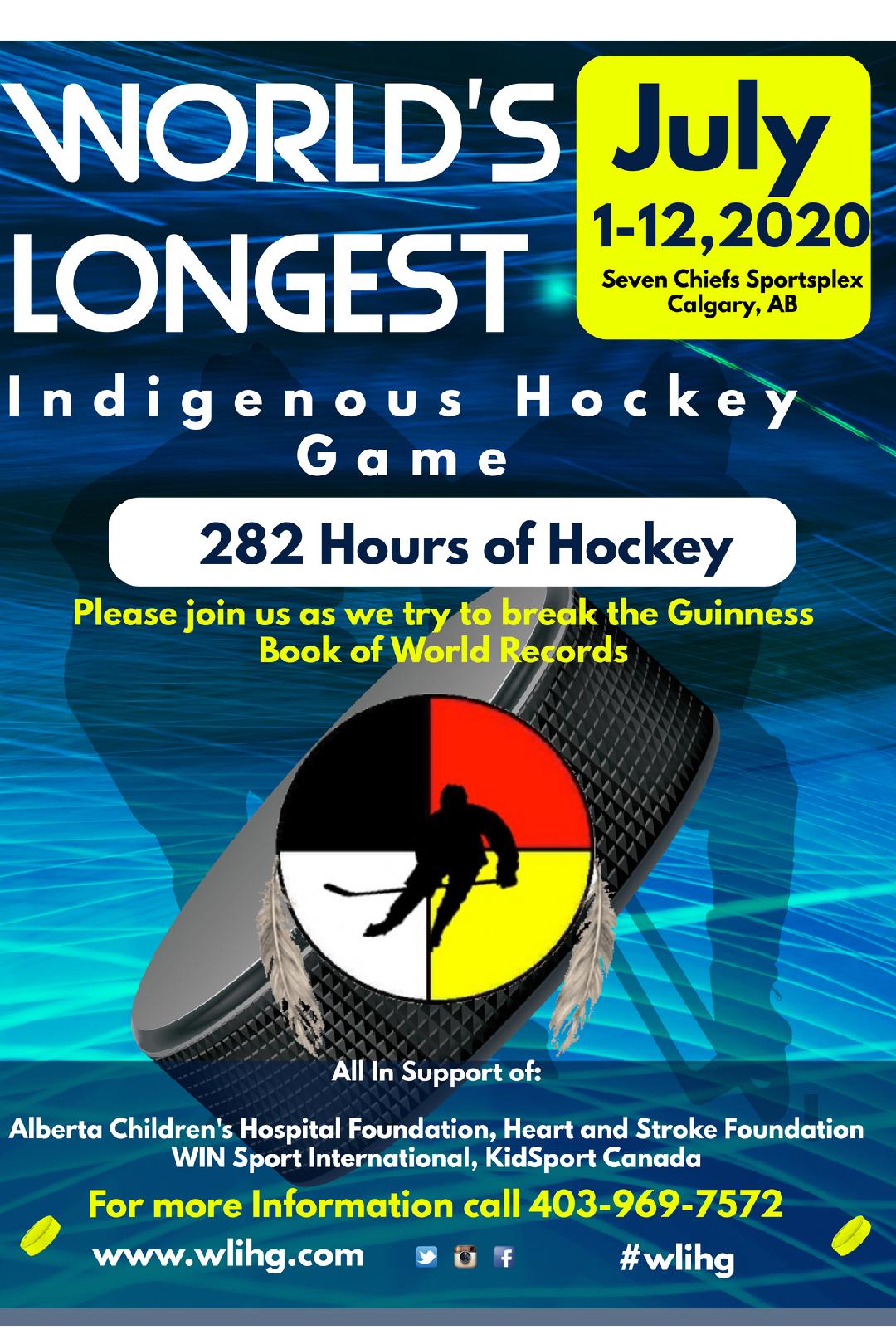