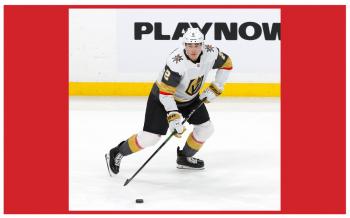 Zach Whitecloud has been selected as Indigenous Male Athlete of the Decade by the Manitoba Aboriginal Sports and Recreation Council. Photo by James Carey Lauder/Game On Magazine
By Sam Laskaris
Local Journalism Initiative Reporter
Windspeaker.com

A pair of elite hockey players have earned prestigious accolades from the Manitoba Aboriginal Sports and Recreation Council (MASRC).

Zach Whitecloud, a member of the National Hockey League’s Vegas Golden Knights, has been selected as MASRC’s Indigenous Male Athlete of the Decade.

And Jocelyne Larocque, the first Indigenous woman to play for the Canadian Olympic women’s hockey squad, was chosen as the Indigenous Female Athlete of the Decade.

“Every year we award athletes, coaches, and volunteers who have made significant accomplishments throughout the season,” said MASRC’s executive director Mel Whitesell.

But this year MASRC officials had to switch up their recognition of deserving recipients.

“Due to the pandemic and the lack of competitive sport, it would have been difficult to recognize any major accomplishments,” Whitesell said.

MASRC officials, however, did not want to skip a year in acknowledging outstanding sporting efforts.

“Since it was 2020, we thought it would be a great opportunity to look back at the past decade to recognize and celebrate careers instead,” Whitesell said.

And that’s exactly what was done.

Besides choosing Whitecloud and Larocque as its top athletes from the past decade, MASRC also recognized four other individuals.

Jayme Menzies and Dale Bear were named as the top Indigenous female and male coaches of the decade, respectively.

And Jacinta Bear and Farom Asham were chosen as the top Indigenous female and male volunteers of the decade.

A closer look at all of the recipients follows:

Whitecloud, a member of Sioux Valley Dakota Nation, is now in his third season of pro hockey. He spent the 2018-19 campaign with the American Hockey League’s Chicago Wolves. Last season he split his time between the Wolves and the Golden Knights.

Though he was not drafted by an NHL team, Whitecloud was considered a highly sought-after prospect while he was in university.

Whitecloud had been named MASRC’s co-winner of its male athlete of the year in 2014, the same year he represented Manitoba at the National Aboriginal Hockey Championships (NAHC).

Larocque, who is Métis, made history at the 2014 Winter Olympics, which were held in Sochi, Russia.

Larocque, who plays defence, helped Canada win a gold medal at those Games. And then four years later she helped win a silver medal at the Winter Olympics in PyeongChang.

One of her teammates at the 2018 Olympics was Brigette Lacquette, the first First Nations player to suit up for the Canadian women’s Olympic hockey club.

Larocque, who is from Ste. Anne, Man., has also captured seven medals (one gold, five silver and one bronze) at world women’s tournaments during her career.

Menzies, who is Métis, founded the Agoojin Volleyball Club in Winnipeg in 2018. She also helps direct and coaches the club which is geared at honing skills for Indigenous female players from across the province.

After a stellar five-season playing career at the University of Winnipeg, Menzies has gone on to become a coach and has led various Manitoba teams at different tournaments.

This list includes coaching a Manitoba entry at the 2017 North American Indigenous Games (NAIG) in Toronto. She also guided a Manitoba squad to the gold medal at the 2017 Canada Summer Games, which were held in Winnipeg.

Bear, a member of Peguis First Nation, joined the MASRC back in 2010 to coach its female teams at the NAHC.

He had more than his share of on-ice successes at the tournament during the past decade.

Bear guided the Manitoba squad to back-to-back championships in 2017 and ’18. He also led the team to a silver-medal finish at the 2019 tournament.

Bear, a member of First River Cree Nation, is married to Dale Bear, the male coach of the decade.

From 2013 through 2020, she served as the manager for the Manitoba female teams that her husband coached at the NAHC.

She also served as the manager of the Norquay Knights teams that her husband coached in the Winnipeg-based North End Hockey Program from 2010 until 2016.

Besides attending the majority of the teams’ games and practices, she also handled all of the Knights’ paperwork, serving as a liaison with parents and players.

Asham, who is Métis and lives in Brandon, has been a volunteer in Manitoba’s baseball community for more than the past 25 years.

He was inducted into the Manitoba Baseball Hall of Fame in 2018, a year after coaching the Manitoba team to a silver-medal finish at the 2017 Canada Summer Games.

Manitoba’s placing in that event was its best finish in 32 years.

Besides coaching, Asham has also served as league president and as an executive member for various baseball circuits throughout the province.

Over the years, Asham has also coached various teams at the Manitoba Games, Western Canada Games and the NAIG.