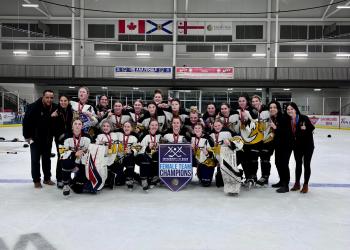 “With this team we were pretty much stacked top to bottom.” —Dale Bear, coach of the gold medal Manitoba Girls squad
By Sam Laskaris
Local Journalism Initiative Reporter
Windspeaker.com

After a two-year tournament hiatus because of the pandemic, coach Dale Bear was once again able to enjoy some success at the National Aboriginal Hockey Championships (NAHC).

Bear guided the Manitoba girls’ squad to the gold medal at the tournament, which concluded on May 14 in Membertou, N.S.

Manitoba rallied from a two-goal, third-period deficit to register a 3-2 victory over Ontario in its championship final.

For Bear, this marked the third time he has led a Manitoba club to a gold medal at the tournament. His clubs captured back-to-back titles in 2017 and ’18. And he also led Manitoba to a silver-medal finish at the 2019 tourney, the last year the NAHC was held before the pandemic forced the cancellation of the next two events.

“Swamp water makes the girls tough,” Bear joked on why his teams have enjoyed their share of tournament success in recent years.

“I think a lot of it has to do with our alumni players,” he said. “I rely on them to find these players.”

Since it can be challenging to scout players from across the province, Bear said some of his previous team players do some unofficial recruiting on his behalf, pointing out talented individuals they come across, sometimes from camps they themselves attend.

“They put them in touch with me and we go from there,” Bear said.

Bear said he was fortunate that Manitoba for the most part was able to have a somewhat normal 2020-21 hockey season, when several other provinces and territories cancelled their programs because of COVID-19 concerns.

“I was able to get out and watch them play,” he said.

Instead of having open tryouts, which could have potentially resulted in a challenging number of players to evaluate, Bear staged an identification camp last August in Winnipeg, which attracted about 60 players.

The squad then had an invite-only camp, which featured 30 skaters and four goaltenders, last December, also in Winnipeg.

The team roster for the NAHC was then chosen in early January.

“I knew we had a good team going into the tournament and I knew a lot of the teams were rebuilding,” Bear said.

Manitoba’s bench boss said this year’s squad was the most talented one he has assembled for the national tourney, which features Indigenous players ages under 18.

“With this team we were pretty much stacked top to bottom,” he said.

But Bear believes his 2019 championship squad possibly had a better group of players on defence. All six individuals who were on defence for that club went on to suit up for various Canadian university clubs.

“We knew we had a chance to go all the way,” Bear said. “But there was no overconfidence in them.”

Dana Geortzen, a Métis forward from Winnipeg and the lone returnee from Manitoba’s 2019 squad, scored the game-winning goal in the dying seconds of the championship final.

Six female teams, representing provinces or regional parts of Canada, participated at this year’s NAHC. And there were seven entrants in the male division. Ontario took home the gold medal in the boys’ final, beating Saskatchewan 3-2 in overtime, in its championship match.

This marked the first year that Brandon Biggars, a member of Wiikwemkoong Unceded Territory on Manitoulin Island, coached the Ontario male team.

He had previously coached the Team North (comprised of players from the country’s three territories) female squad at the 2018 and ’19 NAHC. Biggars previously lived and worked in Nunavut as a teacher.

“No matter what team I coach I always have high expectations,” he said.

Ontario’s roster included five players who spent time with Junior A clubs this past season.

Biedermann and Sobush toiled for the Greater Sudbury Cubs of the Northern Ontario Junior Hockey League (NOJHL). And Hendrick and McCue were members of the NOJHL’s Blind River Beavers.

Ontario’s lineup also featured defenceman Creo Solomon, who began the season with the NOJHL’s Sault Ste. Marie Thunderbirds before being dealt to the Wellington Dukes, who compete in the Ontario Junior Hockey League.

Biggars anticipated the club’s strength would be with its offence. But as it turned out, the club’s defence and goaltending also shone.

“All four lines were producing and doing well,” Biggars said.

The club’s depth and balance was perhaps represented in another way.

“Nobody won an individual award,” Biggars said. “But we won the grand prize.”