LISTEN: Knocked down? Get back up again 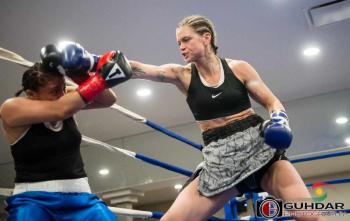 Sheena T. Kaine, a boxer from Fishing Lake Metis Settlement, is known for overcoming adversity. She recently returned home from Oklahoma City after a big fight against powerhouse Mikaela Mayer of Southern California (6-0, 3 KOs), and, although the fight went for a full six rounds, in a unanimous decision Kaine lost on points.

It was Kaine’s sixth professional fight (1 KO) and her first loss. Kaine now sits with a record of 5-1.

Kaine though takes the loss with a grain of salt and is optimistic about her future.

Prior to the Oklahoma fight, she hadn’t fought anyone with a big reputation, and she hadn’t fought in more than a year. It was Mayer’s third fight that year alone. Kaine has only 18 amateur fights, and her opponent had about 160, is a world champion and an Olympian.

Kaine could have taken on a lesser fighter and pad her stats, but that’s not her style.

Kaine describes her job as basically working out all day every day. And, as a result of her hard work and courage, there have been “more fight offers than probably I’ve every had.”

Kaine is in the lightweight class who normally fights at 135 lbs. She dropped to 132 lbs for her fight against Mayer. Fight offers have been coming in for her to drop to 130 lbs, but at 5 foot, 11 inches, Kaine’s not sure how much lighter she can go.

People have called her an Indigenous role model in the sport, and Kaine said she has big enough shoulders to carry that responsibility “and I’ll just do it the best that I can.”

For now, though, Kaine wants to start winning some titles, “ASAP”.

“I’m not getting any younger,” she jokes. “I just want titles as soon as I can. Make my mark, make a stance, make some noise, open doors…”

Kaine has done workshops at conferences, on reserves and settlements. Her topics focus on boxing, eating healthier, living healthier lives and choosing healthier options. And she wants to keeping doing that.

And Kaine will soon be featured in a documentary mini-series called HERoic, which examines and redefines what strength looks like. The series chronicles the journey of a diverse group of female athletes as they overcome odds and expectations. The premiere will be held in Edmonton on Aug. 22.