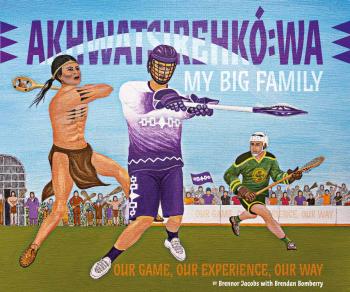 The cover of Akhwatsirehko:wa My Big Family.

“The game holds a great deal of power in the Indigenous community, but it is not exclusive to Indigenous people, and the game itself has touched many lives filling them with hope and determination.” — Brendan Bomberry
By Sam Laskaris
Local Journalism Initiative Reporter
Windspeaker.com

The book, titled Akhwatsirehko:wa My Big Family, has been recognized internationally, winning the Mind, Body and Spirit category of the 2021 Next Generation Indie Book Awards (NGBIA).

Now in their 15th year of operations, the NGBIA is the largest international awards program for Indie authors and independent publishers. Recognition is given to books in more than 70 categories.

Because of the ongoing COVID-19 pandemic, an in-person awards ceremony will not be staged this year. Instead, a virtual ceremony will be held on Facebook on June 25.

Akhwatsirehko:wa My Big Family is a 437-page book, which includes interviews and stories on numerous former and current lacrosse greats and influencers of the sport.

Stories of both Indigenous and non-Indigenous individuals are profiled. Bomberry and Jacobs tell the stories of how lacrosse has helped people benefit spiritually, emotionally and intellectually from their various experiences in the sport.

Jacobs, a former goaltender, advanced to the junior ranks suiting up for various Ontario-based Junior A and Junior B teams in Six Nations, Toronto, London and Wallaceburg.

Bomberry is still an active player. He starred in the Junior A ranks with the Six Nations Arrows. He’s now a member of the Georgia Swarm in the National Lacrosse League (NLL).

“It’s more than a game, and it truly is,” Bomberry writes in the book about the sport of lacrosse.

“It’s the medicine game. By that I mean we play this game as good medicine for the ones who play and for the people that are watching it. If you go to a lacrosse game in the community you will see a ton of people in the stands and they’re all there to take in that good medicine as well, so that’s why we play and that’s why we do it. We also play for the Creator’s enjoyment.”

Jacobs echoes Bomberry’s sentiment of the sport being more than a game.

“Lacrosse teaches us how to enhance our emotional well-being, giving us strength when things do not go our way,” he said. “The game also offers its assistance to create greater intellectual opportunity and has given some a chance at higher education and training.

“Lacrosse is also spiritual in a sense. The game holds a great deal of power in the Indigenous community, but it is not exclusive to Indigenous people, and the game itself has touched many lives filling them with hope and determination.”

Six Nations’ Cody Jamieson, a former junior and current senior star in his community, the captain of the NLL’s Halifax Thunderbirds, explained why he believes the sport is significant, especially for Indigenous people.

“Lacrosse means more to our people than others because it’s in our creation story and it feels like home,” he said. “A lot of families grow up in an arena, in lacrosse arenas specifically, because that’s all we know. You meet a lot of people, and you become family with a lot of people, because you grow up with a lot of friends the same age, so you spend more time with them and that family than you do with some of your relatives.

John Tavares, a Toronto native with Portuguese ancestry, is considered one of the greatest lacrosse players of all-time. He’s now the head coach of the NLL’s Buffalo Bandits.

While growing up, Tavares said he especially enjoyed road games in an Indigenous community.

“I always preferred playing games in Six Nations because I know the game meant so much to the Six Nations people,” he said. “I always tried to impress the Native Americans with my lacrosse skill and the understanding that I love the game of lacrosse as much as anyone.”

Though he toiled for various Senior teams during his playing days, Tavares fondly recalls the years he suited up for Indigenous squads.

He helped the Six Nations Chiefs win the national Mann Cup championship for three straight years, 1994-96. After that he was a member of the Akwesasne Thunder for four seasons.

“I definitely took a lot of pride wearing a Six Nations Chiefs uniform and the Akwesasne Thunder uniform knowing how much the teams meant to each community,” Tavares said. “I met a lot of great people and learned how much the game means to Native Americans and how fortunate I am to be able to play that medicine game in front of so many true lacrosse fans.”

Akhwatsirehko:wa My Big Family was published by Turtle’s Back Publishing, which was founded in 2019 and is a division of the Ontario Native Literacy Coalition (ONLC). One of the ONLC’s goals is to publish Indigenous works that amplify and strengthen Indigenous knowledge.