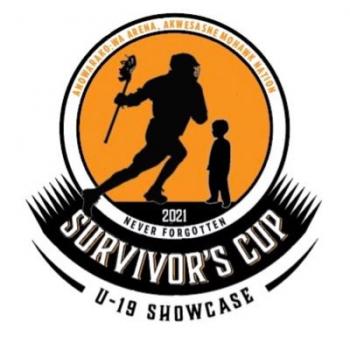 “There were no plastic sticks in the ‘60s and ‘70s. It was a totally different style of game. It’s like a work of art. You are able to do fakes easier with a wooden stick than you are with a plastic one. It’s pretty unique and it’s a lot of fun.” — Perry Blanchard
By Sam Laskaris
Local Journalism Initiative Reporter
Windspeaker.com

What started off as talk for staging some exhibition contests between a pair of junior lacrosse teams has turned into a five-day tournament.

The five-team Survivor’s Cup U-19 Showcase will begin tomorrow and continue until Aug. 22 in Akwesasne, Ont.

Back in June, representatives from the Akwesasne Indians Junior B squad had discussions with officials of the Orangeville Northmen Junior A squad.

The thinking was to have the Orangeville club come to Akwesasne as part of a cultural exchange. The two sides would compete in a couple of exhibition contests and the exchange would allow the visitors to have a better understanding of the cultural importance of lacrosse to Mohawk people.

The Mohawk territory of Akwesasne is unique since its land is not only in Ontario but also spreads into the province of Quebec and the state of New York.

All matches for the Survivor’s Cup will be held at the Anowara’kowa Arena, located in the Ontario portion of Akwesasne.

When word got out about these possible games, other teams expressed interest in taking part. That’s how the event expanded to become a five-club affair.

Also taking part will be an all-star entry called Tri-Nation, comprised of players from Kahnawake Mohawk Territory and the First Nations Lacrosse Association, as well as two more Junior B entrants, the Mimico Mountaineers and Nepean Knights.

The tournament moniker of Survivor’s Cup is to honour those who attended residential schools in Canada.

“It’s in recognition of the travesty of what has happened with Native people,” said Perry Blanchard, a co-chair of the tournament.

Proceeds from the event will also go to worthwhile causes, including suicide prevention and mental health programs.

“I think that is really important, especially with all that we have been through the last couple of years,” Blanchard said.

Besides the ongoing COVID-19 pandemic, Blanchard believes people’s mental health has suffered because of news of Indigenous children’s remains being located in unmarked, undisclosed graves at various former residential school sites, as well as the racism against Black, Indigenous and other peopled of colour, including incidences highlighted by the Black Lives Matter movement, and of the ugliness associated with the 2020 U.S. presidential election.

“It’s been a huge strain on mental health,” Blanchard said. “I think this is a good opportunity to give back to some charities.”

Blanchard said tournament organizers have not established a goal of how much they are hoping they will be able to donate to charity. The plan, however, is to donate 75 per cent of the tournament proceeds.

Due to pandemic restrictions, a maximum of 400 spectators will be allowed for all tournament games.

Those wishing to attend the event must purchase a $100 pass since single-game tickets are not being sold.

Those who wish to livestream some action can purchase games for $9.99 each. Links will be available through the tournament’s Facebook page and Twitter account at https://www.facebook.com/profile.php?id=100064502925944 and https://twitter.com/SurvivorsCup

Spectators, however, will be able to buy a $10 ticket ($8 for Elders and students) for a special exhibition contest that will be staged in conjunction with the tourney.

The Hickory Classic, scheduled for 4 p.m. on Aug. 21, will feature a pair of men’s teams from the First Nations Lacrosse Association, the Akwesasne Bucks and the Snake Island Muskies.

All participants in this contest must use wooden sticks, which were the norm in lacrosse games of yesteryear, instead of plastic sticks which are commonly utilized today in the sport.

“There were no plastic sticks in the ‘60s and ‘70s,” Blanchard said. “It was a totally different style of game. It’s like a work of art. You are able to do fakes easier with a wooden stick than you are with a plastic one. It’s pretty unique and it’s a lot of fun.”

As for the junior entrants, they will play a round-robin format, squaring off against all of their opponents once, resulting in a guarantee of four games.

The top four finishers will then battle in gold-medal and bronze-medal matches on Sunday.

Blanchard is also thrilled to see some junior lacrosse players, who had both their 2020 and ’21 lacrosse seasons cancelled because of the pandemic, back on the floor for tournament action.

“It’s good experience for the kids looking to go to U.S. schools,” Blanchard said, adding he anticipates some American collegiate talent seekers as well as some scouts from the professional National Lacrosse League to take in the tournament action.