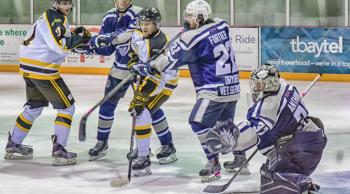 Last November the Dryden GM Ice Dogs squared off against the Red Lake Miners in a game at the Lac Seul Events Centre.

Jeremy Capay has already had a taste of having Junior A hockey in his Lac Seul First Nation in northern Ontario.

And Capay, the manager of the Lac Seul Events Centre, would welcome the opportunity for his community to have its own club.

A total of 532 people attended that contest.

Many Dryden supporters made the two-hour trek to take in that match. And Miners’ fans who attended drove almost four hours each way to take in the action.

The Lac Seul First Nation will host a second SIJHL match next month. The Ice Dogs will once again take part, this time versus the Fort Frances Lakers.

That match is scheduled for Feb. 19.

“We’re expecting about the same amount of fans to show and maybe even more,” Capay said.

Though there have been no formal talks with SIJHL officials about applying for an expansion franchise, Capay said some people in his community are indeed talking about having their own squad.

“There’s been some talk about it or tossing the idea of it around,” he said.

Though he’s the rink manager in town, Capay said he has not heard of any individual or group looking to currently take the lead and apply to bring a SIJHL franchise to Lac Seul.

Capay has also heard rumblings that Lac Seul might even be willing to hook up with Sioux Lookout, a town located about 30 kilometres east, to have a joint team.

Sioux Lookout did have its own SIJHL squad before. The Sioux Lookout Flyers spent four seasons in the loop, from 2008-09 through 2011-12.

The Flyers also began the 2012-13 campaign in the SIJHL. But after just three regular season outings that year the club withdrew from the league.

Though Sioux Lookout officials said at the time they would require an absence of one year to restructure, the organization never did return to the league.

The SIJHL features six entrants this season. Besides Dryden, Red Lake and Fort Frances, there is one other Ontario-based franchise, the Thunder Bay North Stars. The league also includes the Wisconsin Lumberjacks and the Minnesota-based Thief River Falls Norskies.

Dryden president Michael Sveinson is among those who feel a joint entry between Lac Seul and Sioux Lookout could be something to explore.

“Maybe you can do it that way. Play half the games in Sioux Lookout and the other half in Lac Seul,” Sveinson said.

Sveinson also praised the Lac Seul Events Centre, which opened in 2013 and has a capacity of about 1,300 spectators.

And that’s why the Ice Dogs’ president doesn’t mind the fact his club has rescheduled one of its home games next month and moved it to the Lac Seul First Nation.

The Nov. 15 contest against Red Lake was technically a Miners’ home game. The Ice Dogs convincingly won that outing 6-1.

Though Dryden is involved in both games in Lac Seul First Nation this season, Sveinson said his franchise is not considering a possible relocation.

After all, the Ice Dogs are a hit in their own community. Dryden averaged 532 fans per game for its home matches during the 2018-19 season.

“When the team is playing it’s the biggest thing going on in town,” he said. “That formula would probably be the same if there was a team in Lac Seul.”

Sveinson added if Lac Seul First Nation representatives are indeed ready to seriously talk about an expansion entry he’d be willing to assist.

“If they’re interested in that, I’d help them,” he said.

SIJHL commissioner Bryan Graham is pleased a second league game this season will be held in Lac Seul First Nation.

“Any chance we can showcase the SIJHL elsewhere outside of the locales of our six member teams, be it in northwestern Ontario, northern Minnesota or northern Wisconsin, it is something we fully support,” he said. “We look forward to working with all the parties as we see Junior A hockey returning to Lac Seul in February.”