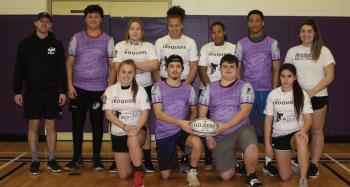 “Besides the USA, there will be teams from Canada, Wales, England, Bermuda, Cayman Islands, Mexico and Australia,” she said. “And organizers are waiting to hear from a team in Zimbabwe. The registration is still open.” — Meghan Wilson
By Sam Laskaris
Windspeaker.com Contributor
OHSWEKEN, Ont.

A pair of First Nations youth rugby teams are gearing up for their first international tournament.

Iroquois Roots Rugby, based in the Six Nations community of Ohsweken, will be sending two clubs to the Tropical 7s, a tournament scheduled for April 10 and April 11 in Orlando, Florida.

The Iroquois program will enter teams in the girls’ under-18 and boys’ under-18 Open categories at the Florida tournament.

Both squads are guaranteed to play a minimum of four matches each. As its name implies, rugby sevens features seven players per team on the field.

Contests do not last very long as they feature a pair of seven-minute halves.

Depending on how well they fare, the Iroquois squads could end up playing seven or eight games each over the two-day tournament.

Iroquois Roots Rugby was founded in 2017 by Meghan Wilson, a former Canadian champion with Hamilton’s McMaster University, and her mother Melanie Squire.

Wilson is thrilled the two clubs will be facing some international opponents.

“Besides the USA, there will be teams from Canada, Wales, England, Bermuda, Cayman Islands, Mexico and Australia,” she said. “And organizers are waiting to hear from a team in Zimbabwe. The registration is still open.”

After the Roots Rugby program’s inception, officials ventured to various First Nations throughout Ontario to introduce the sport to youth.

The club also decided to field girls’ and boys’ under-18 teams at tournaments in Markham and in Brantford in 2019.

Besides Six Nations, players from the Tyendinaga Mohawk Territory and the Oneida Nation of the Thames also suited up for the Iroquois Roots Rugby.

But only players from Six Nations will be making the trip to Orlando. Both teams will consist of 11 players each.

Five staff members are also making the trip. This includes professional lacrosse goaltender Angus Goodleaf, who will serve as the manager for boys’ side.

The two clubs will travel to the Sunshine State in a pair of vans.

“It was one of the more feasible tournaments for us,” Wilson said. “Florida is a drivable distance.”

It will take more than 20 hours for the clubs to drive to the tournament.

And all of the tournament expenses will cost about $20,000 for the two teams.

“We’re about $1,200 shy of our goal,” Wilson said, adding the squads have been holding various fundraisers during the past several months and have also received funds through sponsorship packages from area businesses.

The squads have been holding training sessions in Ohsweken every other week since January.

They’ll step that up and start weekly practices in March.

Wilson realizes the Iroquois teams could be facing some seasoned veterans of the sport in Orlando.

“Most of our athletes are brand new to rugby,” she said. “And a lot of the teams we will be playing are pretty established clubs.”

As a result, program officials are using the tournament as another learning experience and are not worried about how many wins or losses the teams will register.

“We’re not too concerned about our record at this point,” Wilson said.

Wilson added the Iroquois teams did face some formidable opponents in 2019 as well.

“When we played at the Markham tournament we played against elite programs,” she said. “We saw what other programs are doing. I think this (Orlando) tournament will be kind of the same.”

Squire believes the Iroquois teams have made some giant strides since last year.

“I’ve seen so much improvement,” she said. “I’m excited for them to get out and showcase what they can do.”

Both tournaments they competed at in 2019 were a means to gather some experience.

“The boys won one of their games at the Brantford tournament,” Squire said.

Squire wouldn’t be surprised to see the Iroquois entries register some victories in Orlando.

This marks the fourth year that the Tropical 7s event will be staged. Besides under-18 divisions, the event will also include under-14, under-16 and under-23 categories.

Besides the Tropical 7s event, the Iroquois Roots Rugby is also planning to once again enter tournaments in Markham and in Brantford later this year.

Those events will be held in July and September, respectively.