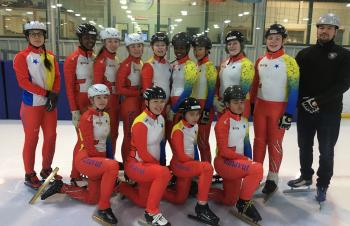 Safety will now be enhanced at a speed skating club in Iqualuit, with new crash mats to place along the rink boards.

“Right now we only have one layer of mats,” said Inuk head coach Kyle St. Laurent. “They can still cause broken limbs, cuts and concussions.”

The Iqaluit Speed Skating Club will purchase the new mats with the $10,000 grand prize won in the Speed Skating Canada initiative. The Iqaluit club was the winner of the Club Excellence Award, sponsored by Intact Insurance, a long-time sponsor of the sport’s governing body in Canada.

Intact Insurance has contributed almost $400,000 to speed skating clubs across the country in the past decade to support various grassroots development projects.

St. Laurent said club officials have been attempting for quite some time now to purchase additional crash mats to improve skater safety. St. Laurent, who has been involved with the Iqaluit club for about 25 years now, first as a skater and later as a coach, estimates he has had about a dozen concussions while skating.

Earlier this year, however, club officials had secured a contribution which would help transport some mats to Iqaluit via a cruise ship route. But that plan was nixed with the cancellation of cruise ship travels due to the COVID-19 pandemic.

St. Laurent said he’s unsure how the new crash mats will be delivered.

And he said club officials are still awaiting word from Iqaluit reps on when they will be able to commence their 2020-21 season. Usually, the season starts in October. But like many sporting activities around the world, the pandemic is forcing organizations to re-adjust their usual offerings.

“We haven’t heard anything yet from the city, which runs the recreational programs,” St. Laurent said. “And there is no ice yet in the rink.”

St. Laurent said the Iqaluit club usually has between 50 to 65 members each year. Typically, about a dozen of those members are Inuit.

Besides receiving $10,000, the Iqaluit club will also receive a visit from two members of the national speed skating squad at some point during the upcoming season.

Dozens of speed skating clubs from across Canada submitted applications to receive funding for various projects.

Officials judged those applications based on the need in the community, the potential for positive impact, the plan to commence the project and the ability to determine how successful the program is.

Hayley Roberts, who is also a coach with the Iqaluit club, submitted the application on behalf of her club.

She was understandably thrilled the Iqaluit club won the grand prize.

“Winning this award means so much to our club and our athletes,” she said. “With this funding we can significantly improve our athletes’ safety.”

An organization in the Northwest Territories with a large number of Indigenous members, the Yellowknife Speed Skating Club, was chosen as one of the four finalists for the Club Excellence Award, and each will receive $2,500.

“We’ll probably focus on our skate inventory,” said Johanna Tiemessen, a board member of the Yellowknife club, who is also its marketing and communications co-ordinator.

Since speed skating skates are expensive, Tiemessen said the club will probably only be able to purchase three or four new pairs with its funding.

The Yellowknife club, which has about 200 members, typically has about 30 or 40 pairs of skates which it rents out to the majority of its members. Some of the club’s elite competitive skaters have their own skates.

The Calgary association is keen to establish a new club in the south end of its city, more than 30 kilometres from its existing venue, to make the sport more accessible to others.

With their funds, Cyclones’ officials plan to purchase some rental skates, hire more coaches and expand their hours of usage at their rink.

And the Peninsula Speed Skating Club, based in North Saanich, B.C., will use its funding to recruit, develop and support coaches as they work towards their certification.