Indigenous women to be inducted into Hall of Fame 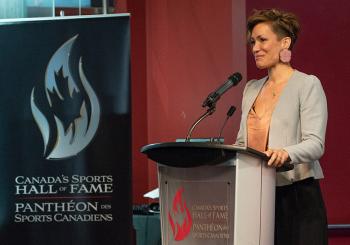 “I was a bit of a troublemaker. I had opinions. And I thought some of the stances I took would prevent me from getting that type of recognition.” — Waneek Horn-Miller
By Sam Laskaris
Windspeaker.com Contributor
CALGARY

A pair of Indigenous women are among the Class of 2019 for Canada’s Sports Hall of Fame.

It was announced this past week that Colette Bourgonje and Waneek Horn-Miller will be among those that will be inducted into the hall later this year.

Bourgonje, who is Metis, captured 10 Paralympic medals. Horn-Miller is a Mohawk who served as the co-captain of the Canadian women’s water polo squad at the 2000 Summer Olympics in Sydney, Australia.

The eight individuals who will enter Canada’s Sports Hall of Fame were revealed at a ceremony in Calgary this past Thursday.

But the actual induction ceremonies will be staged Oct. 23 in Toronto.

Bourgonje competed in a whopping 10 Paralympics, five winter ones and five in the summer. During the Winter Games she would participate in para-skiing events. And during Summer Games she was a wheelchair racer.

Bourgonje captured a total of five Paralympic bronze medals and one silver medal while participating in the Summer Games. And she earned two silver and two bronze medals in winter competitions.

Bourgonje, who is now 57 and lives on acreage 30 kilometres south of Prince Albert, Sask., first heard her name being mentioned as a potential hall of fame nominee last year. That’s when she received a phone call from a student from the University of Windsor, Katharina Fehr, asking if it would be okay to submit her name as a nominee.

“There was no connection to her whatsoever,” Bourgonje said of Fehr. “She was doing it as a (school) project.”

Several months then passed before Bourgonje received a phone call from hall officials informing her that she would indeed be part of the 2019 induction class.

“I didn’t think it would happen that quickly,” Bourgonje said.

During her youth Bourgonje was an elite cross-country runner, competing in various events at the national level.

But she became a paraplegic in 1980, a few months before her high school graduation, following a single car accident in which she was a passenger.

Bourgonje ended up going to the University of Saskatchewan where she became the first individual who uses a wheelchair to graduate from the school’s physical education department.

Besides competing in 10 Paralympics, Bourgonje ended up earning her teaching certificate. She now works as a substitute teacher.

Bourgonje said she didn’t find out about her Indigenous background until she was 35, when a family member started exploring the family ancestry in detail.

“We didn’t know about our (Metis) history,” she said. “It was just something we didn’t discuss. It was taboo.”

But Bourgonje is proud of her background. She now works as the para development co-ordinator for SASKI Skiing, an organization for athletes with disabilities.

“The job has been evolving,” she said. “It started off with scouting and recruiting and now I’m coaching as well.”

Her duties include finding Indigenous athletes to pursue para skiing.

As for Horn-Miller, she’s from the Kahnawake Mohawk Territory in Quebec but now lives in Ottawa with her partner and three children.

Horn-Miller helped Canada win a gold medal at the 1999 Pan American Games staged in Winnipeg. The following year she led the squad to a fifth-place finish at the Sydney Olympics.

“It’s a huge honour,” she said of the Hall of Fame announcement. “It always makes me think of how lucky I was to have the opportunities I did have.”

Despite impressive athletic accomplishments, Horn-Miller, 43, admits she didn’t hold out hope of being honoured nationally again.

“Never in my wildest dreams did I think I would get into Canada’s Sports Hall of Fame,” she said. “I was a bit of a troublemaker. I had opinions. And I thought some of the stances I took would prevent me from getting that type of recognition.”

Horn-Miller and Water Polo Canada officials didn’t see eye-to-eye at times and she accused the organization of racism. She also got flak and praise for posing nude, holding just a water polo ball and wearing a feather in her hair on the cover of Time magazine prior to the 2000 Olympics.

Some felt that picture was controversial while others deemed it a positive expression of a healthy female athlete.

“It really is a surprise and makes me proud of the stances I did take,” Horn-Miller added about  her upcoming hall of fame induction.

Others who will be inducted into Canada’s Sports Hall of Fame this year via the athlete category are freestyle skier Alexandre Bilodeau, hockey goaltender Martin Brodeur, hockey player Jayna Hefford and swimmer Vicki Keith.

Bilodeau won gold medals at the 2010 and 2014 Winter Olympics. Brodeur was a member of three Stanley Cup-winning squads during his National Hockey League career. Hefford captured five Olympic and 12 world championship medals during her time with the Canadian women’s hockey team. And Keith, a marathon swimmer who crossed various bodies of water, established 16 world records.

Meanwhile, Doug Mitchell and Guylaine Bernier will be inducted via the builder category.

Mitchell’s accomplishments include serving as the commissioner of the Canadian Football League and also being the founder of the Lieuteant Governor Athletic Awards, annually honoring the top university athletes in Canada.

Bernier is being inducted for more than 45 years of exploits in rowing as an athlete, official, coach, organizer and volunteer.