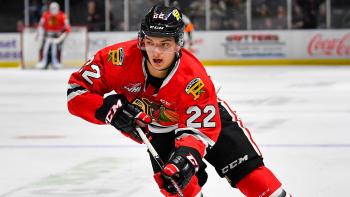 Jaydon Dureau toiled the past two seasons in the Western Hockey League with the Oregon-based Portland Winterhawks.

“I didn’t really want to watch (the draft) and be stressing out. I had my whole day planned out. I did a workout in the morning and then I went golfing with my friends.” — Jaydon Dureau
By Sam Laskaris
Local Journalism Initiative Reporter
Windspeaker.com

It was an unusual way for Jaydon Dureau to find out he had been drafted in the National Hockey League’s Entry Draft this year.

But then again, nothing much about 2020 has been normal.

Because of the COVID-19 pandemic, the two-day draft held earlier this month was staged virtually. For the most part, potential draftees stayed home with their families and friends and followed the televised draft in the hopes they would hear their names.

But Dureau, a player whose mother Nora is a member of Athahkakoop First Nation, a Cree Nation in Saskatchewan, decided to golf with friends during the draft.

“I didn’t really want to watch it and be stressing out,” said Dureau, who spent the past two seasons in the Western Hockey League with the Oregon-based Portland Winterhawks.

“I had my whole day planned out. I did a workout in the morning and then I went golfing with my friends.”

While out on the golf course Dureau, 18, got a call from his parents.

“It was windy on the course and I couldn’t really hear them,” said Dureau, who lives in White City, Sask. “I figured I knew what it was about, but I just hung up on them and was going to check my phone.”

But Dureau didn’t have a chance to do that as his agent, Mike Kaye, who works for The Sports Corporation, an Edmonton-based agency, called with the good news.

Dureau was selected by the defending Stanley Cup champion Tampa Bay Lightning in the fifth round of the draft,  147th over-all.

The fact Dureau got chosen in the seven-round draft was a surprise for some since he was unranked heading into the proceedings.

Dureau, however, said he was confident a squad would select him.

“I was really confident I could get drafted,” he said. “I think I showed a lot of maturity and growth in the second half of the season.”

Dureau had racked up 70 points (19 goals and 51 assists) in 61 regular season contests before the WHL cancelled the rest of its 2019-20 season this past March.

His stats were a vast improvement from his rookie season in Portland when he earned 29 points, including 12 goals, in 67 matches.

Besides putting up some impressive numbers this past season, Dureau also felt he could get drafted because he had conversations with officials from about 10 NHL franchises who had expressed some interest in him before the draft.

Dureau said he chatted a handful of times with Grant Armstrong, who scouts WHL contests for the Lightning.

Armstrong also checked in with Dureau while the Lightning was involved in its recent playoff schedule, just prior to the Stanley Cup championship final series.

Dureau said he congratulated Armstrong for the team’s success to date. But Armstrong told him the squad wasn’t content yet and was looking to register four more victories and win the Cup.

In other years, NHL draftees would head to developmental camps held by the pro clubs shortly after the draft. But those camps didn’t happen this year.

Instead, Dureau and other Lightning draftees were introduced to various club personnel via Zoom calls.

“I’d much rather be able to go to Tampa to skate with everybody and meet everybody in person,” Dureau said.

The pandemic has also pushed back the start of the 2020-21 WHL season. League officials are now hoping to commence league play in early January.

Since the Canadian/U.S. border remains closed, however, there has been talk the WHL might have Portland and the four other American entrants play amongst themselves in regular season action. The league’s 17 Canadian clubs would remain in the country for all of their contests.

Dureau might not have to wait until January, however, to play some games. That’s because the WHL has ruled its Saskatchewan-based players can join Junior A clubs in the lower-calibre Saskatchewan Junior Hockey League (SJHL), which has started its season.

Dureau is hoping that as early as this week he’ll suit up for Melville Millionaires until WHL camps open up and he can return to Portland.

“That would be great if I can,” Dureau said of his desire to join the Melville squad. “I would be very fortunate if I could play some games again.”

But not everybody in the 12-team SJHL is happy to see WHL players toiling in their circuit.

“Some teams are accepting some players and some teams aren’t,” Dureau said, adding he realizes the move is a bit controversial as WHL players who do sign with SJHL clubs will take away some ice time from other regular players.

Dureau is hoping his WHL campaign does eventually go ahead as he is keen to continue developing in the hopes of eventually turning pro with the Lightning organization.

Dureau would also be eligible to return to Portland as an overage player for the 2021-22 campaign.

But he’s hoping he’ll be ready to turn pro by then and at least suit up for the Syracuse Crunch, Tampa Bay’s top minor pro affiliate club, which competes in the American Hockey League.