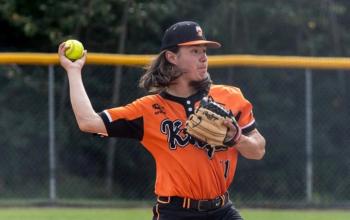 “They liked I was a team player and showed a love for the game of ball.” — Nicholas Potskin
By Sam Laskaris
Windspeaker.com Contributor
PRINCE GEORGE, B.C.

Nicholas Potskin will not have to wait until next year to play his next fastball game.

That’s because the 22-year-old Indigenous player, a member of the Driftpile First Nation in Alberta, will soon be off to join at least one club in Wellington, New Zealand.

Potskin, who grew up and still lives in Prince George, B.C., was competing at a tournament in June with his hometown team, the Big Guy Lake Kings.

Some players from New Zealand were participating in the same tournament and were impressed with Potskin’s play.

“They mentioned it would be cool if I came down (to New Zealand) and played with them,” said Potskin, who plays a number of different positions but is primarily utilized as a shortstop. “They liked I was a team player and showed a love for the game of ball.”

Potskin originally thought those conversations were just that— talk.

“I thought it would be a cool idea,” he said. “But then nobody followed up on it (right away).”

Then in September Potskin was contacted via a text and told a spot would be available for him if he would be interested in playing in New Zealand for a five-month stint.

He was offered an opportunity to play for a Wellington squad, which competes in the Island Bay Softball League, from November through March.

Potskin has to pay for his own flights to New Zealand and back home. He’s already purchased those flights, an expense which cost him about $1,700.

While in Wellington, however, his Wellington club will provide him with housing and also help him secure a part-time job. He is uncertain at this point what position he would have for work, but anticipates it will be manual labour.

“And they do have a travel team they can hook me up with,” Potskin said.

That travel team—much like the Big Guy Lake Kings — would attend various tournaments in the hopes of winning some cash prizes. Team members often evenly split winnings from events.

“It’s a great opportunity,” Potskin said. “And you play ball all-year round.”

As expected, Potskin is looking forward to his New Zealand excursion.

“I’m hoping to learn more about the game, improve my skills and then be ready for next season in Canada,” he said.

Some familiar faces are expected to visit Potskin while he is in New Zealand. His girlfriend will be joining him for a portion of his stay. And his father will also come for a stretch.

Potskin will leave for Wellington on Nov. 6. If all goes well with his travel plans, he would suit up and play his first game for the Wellington team the following day.

Potskin plans to return home and suit up for the Big Guy Lake Kings again in 2020. That squad is a member of the Spruce City Men’s Fastball League.

“The league might be a bit better in New Zealand,” Potskin said. “As for the tournaments, they’ll probably be pretty similar (to the ones in Canada).”

Potskin had a memorable 2019 campaign with the Big Guy Lake Kings.

Highlights included placing third at the Canadian Native Fastball Championships, which were staged in Winnipeg in early August.

Potskin also joined the Grande Prairie Pirates and helped them to a seventh-place finish at the International Softball Congress (ISC) world tournament, which was staged in Wisconsin in August.

For Potskin this marked the second consecutive year he participated at the ISC tourney. In 2018 he toiled for the Alberta-based Irma Tigers that took part in the event held in Kitchener, Ont.

Earlier this year Potskin also completed his studies. He graduated from the University of Northern British Columbia, located in Prince George, with a bachelor of commerce degree in accounting and finance.

While in New Zealand he’ll be taking a leave from his current job. Since September of 2017 he’s been working as a finance clerk for the Tsay Keh Dene Nation.