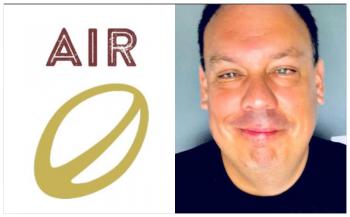 “I think rugby can be used as a vehicle to make things better. In sport, you can make change rather quickly.” —Jason Peters
By Sam Laskaris
Local Journalism Initiative Reporter
Windspeaker.com

Jason Peters is looking to make a difference.

And Peters, a member of Glooscap First Nation in Nova Scotia, believes he can accomplish that through rugby, the sport he loves most.

To this end, Peters has launched Atlantic Indigenous Rugby (AIR), which will feature players in the country’s four most easterly provinces.

One of the goals is to have the women’s and men’s teams from the AIR program compete in a peace and friendship tour against clubs from Nova Scotia, New Brunswick, Prince Edward Island and Newfoundland and Labrador next summer.

Peters, who lives in Halifax, said he was inspired to launch the AIR program in part by recent global events.

“Over the last four, six months I’ve noticed there have been a lot of issues, and I’m not the only one who has noticed this, with the Black Lives Matter and Indigenous Lives Matter movements,” he said. “Things are getting progressively worse.”

To do his part for change, Peters created the AIR program.

“In rugby, they seem to be very accepting of culture,” he said. “I think rugby can be used as a vehicle to make things better. In sport, you can make change rather quickly.”

The plan is to not simply just have the AIR squads participate in exhibition contests versus non-Indigenous squads.

The AIR teams will also be promoting treaty education, anti-racism messaging and the Truth and Reconciliation Commission of Canada’s report.

Prior to the exhibition matches, which will be held on Saturdays, Peters said he is looking to stage powwows the night before in each Atlantic city.

“We really want to introduce our culture to the Canadian culture,” he said. “Many times, there’s a lack of understanding.”

Peters has already identified the four established clubs that he would like to see the AIR teams play against.

They are the Halifax Tars, Fredericton Loyalists, Charlottetown’s Mudmen and the Swirlers Rugby Club from St. John’s, Nfld.

“We’ve already started conversations with some of the clubs,” Peters said.

Those looking to be a part of the AIR program must be Indigenous and from one of Canada’s Atlantic provinces.

Peters said the squad will also accept Indigenous players from other parts of the country who are now living in Atlantic Canada.

Early indications are Peters might not have too many difficulties attracting players, ages 18 and up for the women’s and men’s teams.

A couple of days after posting on social media that the program was seeking players, more than two dozen individuals had already expressed interest.

“We literally just put the call out,” Peters said.

It’s unlikely that any players that are keen to play for the AIR program will be turned away.

“We’re hoping to have enough to have the two teams,” Peters said, adding most rugby programs do not cut players who are seeking to join a club. “If things pan out and we get a lot more, we could have two or three teams (for each gender).”

Peters, 47, is thinking about playing himself.

“I’m going to give it another shot this year and hopefully play,” he said, adding he has also taken various coaching courses and could step into a coaching capacity instead for the AIR program.

To start off with, the AIR program will be looking to form clubs that will participate in the version of rugby featuring 15 players per side.

But Peters said AIR could also form clubs playing a variation of the sport, including rugby sevens (seven players per side).

Besides having the names of more than a couple of dozen players interested in suiting up for the AIR program, Peters has also received some off-field support.

A handful of eastern Canadian individuals with impressive sporting and rugby resumes have accepted offers to serve on AIR’s board of directors.

Also, Bill Webb, the president and one of the owners of the Toronto Arrows, has agreed to a board advisory position. The Arrows are a professional men’s squad that competes in a circuit called Major League Rugby.

Webb has agreed to assist the AIR program even though he does not have any Indigenous ancestry.

“Bill is very much about growing the game of rugby in Canada,” Peters said. “His networks have been unbelievable so far.”

Besides trying to attract more players to the program, Peters will spend the coming months attempting to seek some funding and sponsors for the AIR program.

Club members are expected to start training together next March.