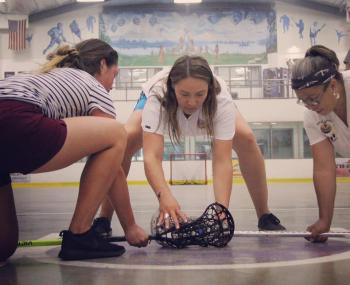 Katie Gaudette is viewing it as one final opportunity to work alongside her father before he retires from coaching.

And for Mekwan Tulpin, she considers her latest gig as a chance to further her coaching career, hopefully en route to one day being the head coach for squads competing at the provincial and national levels.

Both Gaudette, a 24-year-old Mi’kmaw woman who lives in the Newfoundland city of Corner Brook, and Tulpin, Mushkegowuk Cree from the Fort Albany First Nation, are among the 22 individuals selected to be part of the Aboriginal Apprentice Coaching Program for next year’s Canada Summer Games.

All of those in the Indigenous apprentice program will serve as fully accredited members of the coaching staff for their respective provincial or territorial teams. The Games are scheduled for Aug. 6 to Aug. 21, 2021 in Ontario’s Niagara Region.

Gaudette will work for the beach volleyball squad representing Newfoundland and Labrador.

And Tulpin, a 32-year-old who now lives in the Six Nations community of Ohsweken, will work with the Team Ontario women’s under-21 box lacrosse squad.

The Aboriginal Apprentice Coaching Program is a partnership between the Coaching Association of Canada, the Canada Games Council, the Aboriginal Sport Circle, Provincial/Territorial Coaching Representatives, as well as various provincial and territorial Aboriginal sports bodies across the country.

Each province or territory can send a maximum of two Indigenous individuals to serve as apprentice coaches at next year’s Games.

Gaudette’s father Finton had previously been selected to be the head coach for Newfoundland and Labrador’s beach volleyball entrants for the 2021 Canada Summer Games, a multi-sport competition held every four years.

Canada Winter Games are also staged every four years. There is a two-year difference between the summer and winter Games.

Gaudette was thrilled when she received the news she would also be coaching at the 2021 Games and be an apprentice coach under her father.

“I was very excited,” she said. “I think it’s going to be incredible. He’s super knowledgeable.”

Since the elder Gaudette is planning to retire from the coaching ranks following next year’s Games, his daughter said the fact they will work together one last time will be like a passing of the torch.

The father-daughter duo had previously coached together at the 2019 Atlantic Indigenous Games. The Gaudettes coached their provincial women’s and men’s beach volleyball squads at those Games, held last July in Halifax.

Gaudette has been coaching with the Corner Brook Beach Volleyball Association since 2017. She has also been working with the provincial team program for four years.

And for the past two years she has also been a coach for the senior girls’ volleyball team at Corner Brook Regional High School.

Gaudette is not certain when her duties as part of the apprentice coaching program will commence because of COVID-19 restrictions in place that have put a hold on sporting activities across Canada.

“We’re a little unsure of our schedules,” she said.

As for Tulpin, she’s excited that she will be a part of history at the 2021 Canada Summer Games.

“This will be the first time women’s box lacrosse will be featured in the Games,” she said.

Tulpin is also looking forward to being part of the entire Ontario contingent at the Games. More than 5,000 athletes and coaches are expected to take part. A total of 20 different sports are being offered.

There will be varying age categories for the various sports. The majority of the participants, however, will be 21 and under.

“It will allow me the opportunity to enjoy some team successes and failures,” Tulpin said.

While she does not have an abundance of coaching experience, Tulpin does have some previous experience from another prestigious competition. She was part of the Ontario coaching staff for the boys’ box lacrosse teams at the 2014 North American Indigenous Games in Regina.

The Ontario under-16 squad captured the gold medal at that event, while its under-19 team returned home with the silver medal.

Tulpin does have plenty of experience teaching some of the nuances of lacrosse.

She works as a high performance co-ordinator for Indigenous Sport & Wellness Ontario. Through this association she has conducted numerous multi-sport camps, including lacrosse, over the past several years in various Indigenous communities across Ontario.

Tulpin has also worked at numerous clinics that have operated through the Iroquois Lacrosse Association.

And Tulpin also continues to play the sport herself. The pandemic, however, altered her playing plans for 2020.

For starters, Tulpin and her teammates with the Six Nations Lady Snipers were unable to complete their season in the women’s division of the Arena Lacrosse League.

And the entire 2020 season in the Ontario Women’s Box Lacrosse League was wiped out. Tulpin toils for the Grand River Attack in this circuit.