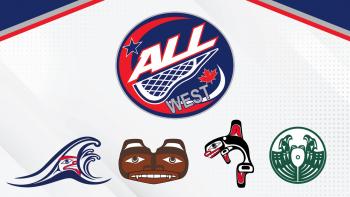 The names and logos of the teams in the new West Division of the Arena Lacrosse League are from left to right: Sea Spray, Grizzlies, Black Fish and Shooting Eagles.

Aspiring professional lacrosse players will be hitting the floor in a new British Columbia-based circuit next month.

And they will all be representing squads whose names were chosen not only for their connections to the West Coast but also for the region’s Indigenous culture.

The Arena Lacrosse League, a circuit which has operated in Ontario since 2017, recently announced it would be expanding and now feature a four-squad West Division.

All of those West entrants will play out of the fieldhouse at the Langley Events Centre, located in the city which is officially part of the Metro Vancouver Regional District.

Ken Buchan, the commissioner of the ALL West Division, said several league officials were among those who decided on the four team names.

“It was a group effort,” he said. “We all put names forward. And then we removed a few of them.”

To honour Indigenous culture and the West Coast, it was deemed important to select monikers representing water, land, mountains and sky.

According to a press statement, the name Grizzlies was picked because bears are viewed as symbols of wisdom. They are also frequently portrayed as guardians, teachers, leaders and healers.

As for Black Fish, that’s a name for the Killer Whale or orca, which is considered a medicinal animal for Indigenous tribes on the northwest coast, reads the statement.

Sea Spray is representative of water, a sacred gift that connects all life.

And Shooting Eagles, besides reflecting shots taken in the sport, are symbolic of the birds that are considered masters of the sky. Also, eagles are significant as they are believed to be the creature with the closest relationship with the Creator, considered the Creator’s messenger.

Squamish Nation artist Yul Baker designed the logos for all four of the clubs. Baker will also serve as an assistant coach for the Grizzlies.

“Our coaching staff is all Indigenous,” said Tewanee Joseph, who is a Squamish Nation member who will be behind the Grizzlies bench as well, working as an assistant coach. “We want to bring some respect to the game and some excitement as well.”

All four of the ALL West Division teams are expected to include some Indigenous players. The Grizzlies will in all likelihood have the most Indigenous representation. Joseph said he believes eight of the club’s draft picks are Indigenous.

Joseph said his uncle Dennis Joseph has been brought on board to be the Elder ambassador for the Grizzlies.

Through the season Dennis Joseph will share Indigenous culture and education of the game through an Indigenous lens with team players.

“I think out west especially the move is to share Indigenous values and the connections to the land,” Tewanee Joseph said.

Buchan said all four West Division logos have been enthusiastically received. In fact, he said several people have already approached league officials inquiring about purchasing some merchandise from the new clubs.

Playoffs will follow and the ALL West Division championship is scheduled for March 27.

For now, Buchan said league officials have been focused on outfitting participating players and taking care of other business.

“This has all come together really, really quickly,” he said. “We ordered jerseys five weeks before the league starts.”

Buchan said he’s hopeful ALL West Division replica jerseys, hoodies and hats will soon be items that members of the public can purchase.

“Once the league gets going, then that will be the time to start thinking about merchandise,” he said.

Buchan said about 160 individuals expressed interest in participating the division this upcoming season.

Staffs from all four clubs were able to evaluate the talent of these players during a three-day combine camp, which was held this past week and concluded on Wednesday.

This was followed by a 37-round draft, which was held on Saturday.

“Everybody who registered for the league got drafted,” Buchan said.

As is the case with the seven Ontario-based teams in the ALL, players do pay a registration fee to help cover some of the league’s costs.

A reward for excelling in the loop is being signed by an NLL franchise. The ALL prides itself on the fact that 15 per cent of all players currently on NLL rosters spent at least one game in their circuit.

The Langley Events Centre includes an arena. The Vancouver Giants, who compete in the Western Hockey League, are one of the rink’s main tenants.

The fieldhouse, where the lacrosse games will be held,  has a capacity for about 300 spectators. Buchan believes lacrosse matches will be well attended.

“I think we’re going to get a lot of people,” he said. “People have been starved for lacrosse in the Lower Mainland the last couple of years.”