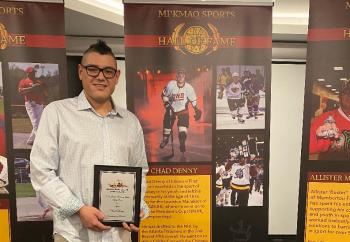 Chad Denny of Eskasoni First Nation in Nova Scotia was inducted into the Mi’kmaq Sports Hall of Fame.

“She said she wanted to nominate me. And she said I’m not guaranteeing you will win it. It was a great honour and I was caught off guard when I did.” — Chad Denny
By Sam Laskaris
Local Journalism Initiative Reporter
Windspeaker.com

And now the 34-year-old, a member of Eskasoni First Nation in Nova Scotia, has another accomplishment he can be proud of.

Denny was one of four individuals inducted into the Mi’kmaq Sports Hall of Fame this year.

“It’s an honour,” Denny said. “It’s not every day you get inducted into a hall of fame.”

Denny said he’s pleased not only for himself but for the others who were also honoured.

“It’s always great to have Aboriginal athletes get some recognition,” he said. “I feel First Nations people are always getting put down instead of getting raised up. It’s a constant struggle.”

Denny had been chosen by the Atlanta Thrashers in the second round, 49th over-all, in the 2005 National Hockey League (NHL) Entry Draft.

Though he never did play a game in the NHL, Denny participated at various other elite levels.

During his junior days he spent four seasons with the Lewiston MAINEiacs in the Quebec Major Junior Hockey League.

The MAINEiacs won their league championship in 2007, Denny’s final season in the junior ranks.

Denny also had some immediate success as a pro. He was a member of the Chicago Wolves that captured the American Hockey League title in 2008.

Denny also had stints with the Utah Grizzlies and the Georgia-based Gwinnett Gladiators in another minor pro circuit, the ECHL, before deciding to return to school.

He played two years at the University of New Brunswick (UNB), helping the school team capture the Canadian university championship in 2013.

Denny earned both a Kinesiology degree and a Bachelor of Education degree from UNB.

He is currently working as a Mi’kmaq language consultant for the Eel River Bar First Nation in New Brunswick.

And he’s hoping to continue playing hockey. Two years ago he was a member of the Dalhousie Marauders, a Senior A club that plays its home games about five kilometres from his Eel River Bar home.

The Marauders were unable to complete their 2019-20 season because of the COVID-19 pandemic.

Though the Dalhousie squad has commenced its current campaign, Denny has not suited up for a game yet.

“I have to sit down with them and see what’s going on,” said Denny, who is eager to join the franchise.

But first he must determine what sort of role he would have with the Marauders. Denny said a league rule stipulates that the Dalhousie club can only dress three players over the age of 33 for each game.

Denny said the squad already has about a half dozen individuals who fit into this age grouping.

Denny also said he was unaware of the existence of the Mi’kmaq Sports Hall of Fame until earlier this year.

He said his former high school teacher Newell Johnson contacted him to get some biographical information as she was keen to submit a hall nomination.

“She helped me a lot when I played Major Junior (in Lewiston),” Denny said, adding he was taking correspondence classes from his hometown high school even though he was living and playing in Maine. “She said she wanted to nominate me. And she said I’m not guaranteeing you will win it. It was a great honour and I was caught off guard when I did.”

Denny was inducted into the hall of fame via the Athlete category.

Bernie Denny, also of Eskasoni First Nation, was inducted posthumously, also through the Athlete category. He had excelled in both hockey and softball.

The two other inductees this year were Robert Bernard and Allister (Buster) Matthews.

He was inducted through both the Athlete and Builder categories as he spent numerous years advocating for the development and sustainability of the sport in Nova Scotia.

Bernard also served as the executive director for NovaScotia Mi’kmaw Sports from 1997 through to 2010.

Matthews, a member of Membertou First Nation, was inducted through the Builder category. He has spent more than 50 years supporting community and youth sports.

Matthews is also a Membertou councillor, who is serving his 17th term in office.

The Mi’kmaq Sports Hall of Fame does not have a physical building. It is a mobile exhibit that is set up on request.