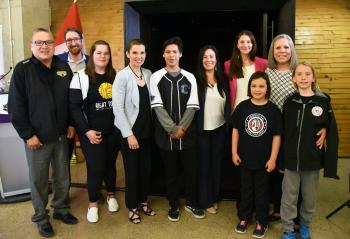 Kirsty Duncan, the federal Minister of Science and Sport, (fourth from left) attended the news conference in Toronto announcing the new funding.

The investment of almost $50 million over the next five years will be used to expand and create new sporting and physical activity programs in more than 300 Indigenous communities.

“It really is historic,” said Janice Forsyth, the president of the Aboriginal Sport Circle (ASC), the governing body for Indigenous athletics in Canada. “It is new money from the government.”

The federal government will chip in $9.5 million per year for the next five years, for a total of $47.5 million. That money will be divvied up through a pair of streams.

For starters, $5.3 million annually will be made available to the ASC and its 13 provincial or territorial Aboriginal sports bodies. These funds will be directed to sports programs and community physical activity projects.

The new funding is called the Indigenous Sport Initiative and it has four main objectives. They are to improve the health, education and employability of Indigenous people across the country. And the other goal is to reduce at-risk behaviour.

Forsyth said the new funding will enable the volunteer-run ASC to hire a CEO, who will assist with the management of the federal money.

The ASC was established in 1995. But Forsyth said various regional Indigenous sports associations have been around in Canada since the 1970s.

They’ve been trying to develop athletic programming for Indigenous people since then.

“It’s been a long time coming,” Forsyth said of the significant financial commitment from the Canadian government. “And it’s a really good sign.”

Applications are currently being accepted to fund sports and physical activity programs in Indigenous communities.

Forsyth, however, is unable to give specifics on which programs might benefit or be created.

“It’s all kind of new,” she said. “But there has been a lot of activity in the regions. And they’re collaborating on what they’re going to do for projects.”

Provincial and territorial Indigenous sports organizations have until July 5 to submit proposals for projects they would like to be funded for this year.

And Indigenous governments, communities and organizations, as well as those groups that deliver program to Indigenous communities, have until July 19 to apply for funding this year.

“Sport builds self-esteem and leadership skills,” Duncan said in her speech. “It allows our children and youth to grow and thrive — physically, emotionally and socially. Everyone deserves the opportunity to benefit from sport.”

Duncan realizes such has not been the case.

“Sadly, many barriers remain to ensuring that everyone has access to sport, including culturally relevant sport, as in the case of Indigenous children and youth,” she said. “We know there is a significant gap between the socio-economic well-being of Indigenous and non-Indigenous peoples and communities.”

“I’m just really, really thankful,” she said. “This is a really great step for the country.”

That’s because ISWO revealed information about the launch of the 2019 Sport Development Tour: On The Road to NAIG.

The 2020 North American Indigenous Games will be held in Halifax next July.

Plett said the ISWO traditionally hosts an Ontario Indigenous Summer Games, which serves as a qualifier for some and a lead-in for the NAIG the following year. But a provincial Games will not be happening in Ontario this year.

“The price tag was tough to justify,” Plett said.

Instead, ISWO’s new program will allow for various sports clinics and multi-sports camps to be held in various Indigenous communities throughout Ontario.

The belief is that these events will collectively reach a much larger number of participants.

Also ISWO officials will be in attendance at all of these events and they will be seeking to identify athletes who can go on to represent the province at next year’s NAIG.

The first event of ISWO’s Sport Development Tour was held last week as the Munsee-Delaware Nation in southwest Ontario hosted an archery competition for those ages seven to 19.